Kicking it with the #RWTastingCrew

I finally made it to my first Red White Tasting Crew wine tasting last night. With the good weather starting to filter in I hope to get to them on a regular basis.
Last night’s event was at Whole Foods on River Street in Cambridge. We don’t have Whole Foods in NH (yet) and I can’t recall if I have ever been in one before. I bet I have, but just don’t remember it. This particular location has a community room that is open to book events in. David from Whole Food explained that the room was open for booking by the public and for legitimate events there was no booking fee. Pretty cool! 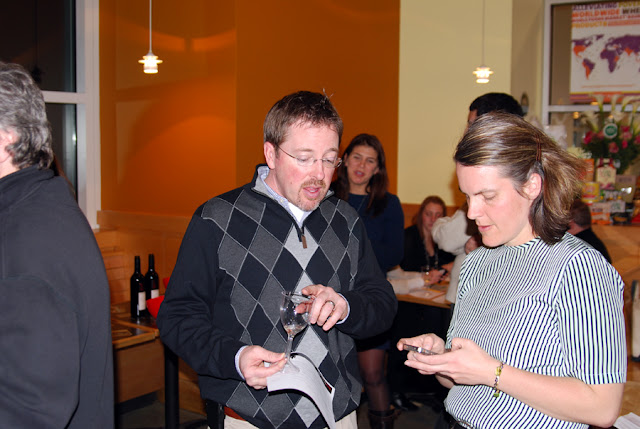 Cathy from Red White Boston was particularly excited about this month’s event for a couple of reasons. First, Panther Distributing is a new wine distributor to the state of MA was on hand to showcase wines from Oregon and Australia that are just becoming available in the state. Secondly, she was hoping to continue to the conversation and research into using a badging system for identifying wines of note shared by Red White Boston through their smartphone app and other communications. I was definitely interested in seeing what came of this as well. I had been pretty vocal about not really seeing where badges fit during a vibrant Twitter conversation on the topic.
The first person I met was Melanie who tweets with the handle @kissmyglasswine. We have interacted a bit on Twitter before and of course recognized each other by our handles. We tasted the first couple of wines seated next to each other and I definitely enjoyed swapping tasting notes as we went. Her freewheeling, fun filled approach to wine tasting is a refreshing. I am definitely going to be looking for another chance to talk with Melanie.
We started off with the Brookman Wines Chenin Blanc 2008. This wine comes from the McLaren Vale Region in South Australia. The Mediterranean climate, thin soils and limited water during the growing season typically translates in considerable ripeness in the wines. Chenin Blanc is a minor grape, in acreage planted, for Australia and is typically used in blending. The nose isn’t huge on this wine, but it did present some pear and floral notes. I picked up flavors of melon, citrus and experienced the classic oily texture found in Chenin Blanc based wines. 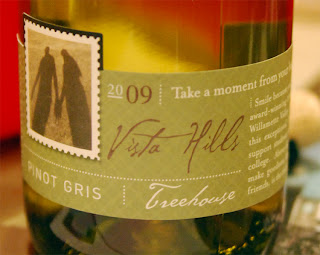 Next up was the Vista Hills Oregon Pinot Gris 2009. I first had Pinot Gris from Oregon last May and my benchmark is the bottle of King Estate Signature Pinot Gris 2008 we enjoyed in a simple wine & cheese tasting in our hotel room in Seattle. I haven’t found anything yet that lives up to it. I found the Vista Hills to have subtle aromas and very light flavors. It was enjoyable, but not a stunner. It would work well with food, but only because it wouldn’t offer much to conflict for the food. This isn’t the type of pairings I am typically after.

From there we moved on to the Conte Estate Primrose Lane Chardonnay from Australia. This was the least exciting of the wines for me. When Cathy asked the crew for thoughts, I responded that I thought “it was hiding in the corner.” There was almost no aroma and while there were flavors of toast, smoke and a little peach the wine exited so fast you could easily miss them. I was surprised at this because Chardonnay from Australia has generally been much more lively in my experience.


I ran into Maureen the Boston Marketing Manager for Second Glass who sponsor the Wine Riots. I thanked her group for reprinting our two posts on their web site from the Boston Wine Riot last Fall. I understand things are going gangbusters for Second Glass as they expand the Wine Riots into more cities. This year’s in Boston is in April and I was sad to realize I would likely be missing it. Oh, always next time! 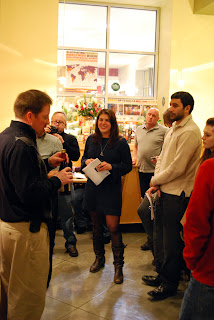 The next wine was the Linda Domas Shotbull Shiraz Rosé 2008 also from Australia. I have only had a few Shiraz Rosés in my life and each time has been a pleasure just because Rosé made from this grape is distinct. Bold with spicy notes true to the grape were right there for you to experience. I ended up finding that when paired with blue cheese the sweetness in the wine bumped up just a little, and I felt I enjoyed it more. Dan from Panther offered up some lore about this wine with the rumor that Linda (the winemaker) has been known to skinny dip in vats of the wine during its early life. Interesting, weird and a great way to sell wine!

While I filtered around and networked with other tasters I met Meesh from the Just Add Cheese blog. Another first meeting via Twitter handle recognition! We caught up a bit later as Cathy and I were talking about the Rosé. I mentioned my interest in thinking about where the berry flavors in the wine came from and what it might have tasted like prior to and during fermentation. As a winemaker I think of these things. Meesh was obviously curious about such a specific consideration and mentioned she was working to get better at recognizing flavors in wine. No small challenge and noble pursuit for sure. I recommended using foods that express those flavors to help create an imprint. My specific example was to get fresh berries, cut them up and simply sit with them for while. Take in the aromas, let them sit on your tongue for a time. Mush some up in your fingers and really get into it!

Our first red was the La Bete Selection du Cave Pinot Noir from Oregon. This wine is definitely in the Burgundian style which is not typical for American Pinots outside the Willamette Valley. I have enjoyed a few from this area before but have big plans on taking quite a few more down on our upcoming trip out there in September. This had a lighter aroma that I expected, but the earthiness and restraint in the flavors and body were there. I picked up red berries, mushrooms and a little bitter chocolate. I would drink this again, but I suspect in its very best years it would be better still.

The second red was the Brookman Wines “Cool Sands” Cab/Merlot 2009 from Australia. The aromas coming from this glass of wine stopped me dead. So potent and complex. Berries, plums, leafy greens, tobacco. All harmoniously jumping in and out of the glass. When you’ve got it, you’ve got it! The wine was balanced superbly with acid, alcohol and tannins all finely tuned to enjoy. I went back to this one later to enjoy it for just a little longer. This was my absolute favorite of the night and will be something I will be sourcing to have at home. 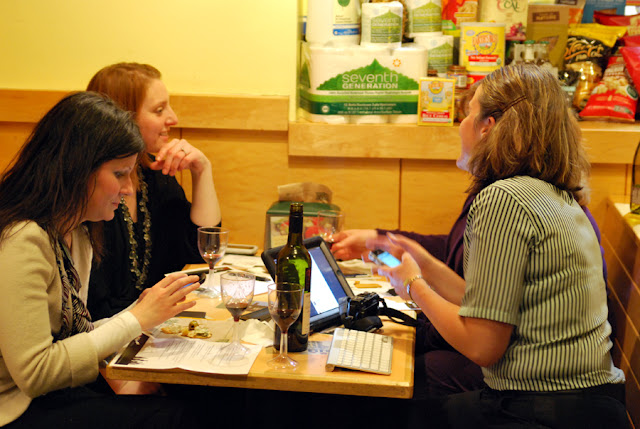 ( The business of wine tasting looks hard! )
I didn’t catch the results from the badge voting, but Cathy promised to have it up in a blog post soon. I did share my additional considerations on badges with her and I can see where some of her target audience should embrace it in their wine pursuits. For me, and I suspect others as well, I may already be too specific in what I looking after for a badge to matter. Not really a problem, clearly an opportunity. 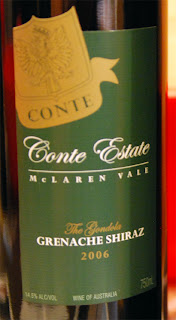 In the middle of tasting the reds I was introduced to Ray & Rachel from French Oak TV. We have been Twitter buddies for a while, but hadn’t had a chance to meet yet. Rachel is new to the team (she was impressed that I had read the blog from 2 days prior announcing her a new team member) and excitedly talked about the whiskey tasting she went to on Sunday at Julio’s Liquors in Westborough, MA. I am pretty jealous of that. I would have loved to take a shot at 200 whiskeys. There might have been consequences though! Her story prompted me to share my experience with the Vieux Marc from Barville the week before when in Provence. I capped that off, as I did in the post, with a reflection on sitting outside in Provence smoking a Cuban cigar drinking a tall glass of it. Man that was good!

The last wine of the evening was the Conte Estate The Gondola Grenache/Shiraz 2006. This wine was definitely richer than the “Cool Sands” but with just a little less aroma. I picked up blackberry in the nose and again in the flavors. Additional flavors of black pepper and licorice were finished with smooth, soft tannins. I definitely enjoyed this, and so did the group based on the voting, but I still gave me nod to the “Cool Sands”. Something about first impressions.

I made a quick exit from the event primarily because I had a train trip and a ride to get home and I was getting tired. Hopefully next time I can stick around for some more networking or an after party! I can’t wait to hang with this crew again!

This looks like a blast! I love all of your wine commentary! :D