The Wines We Enjoyed In Provence

There were several areas that we enjoyed wines from during our visit toProvence last week. We had reds from Cotes du Ventoux and Cotes du Rhone, a nearly 20 year old white from Chateauneuf-du-Pape (CDP), box format reds from Gigondas and Cotes du Rhone, a couple of roses from Cotes du Ventoux and Cotes du Provence and Muscat from Beaumes de Venise. All of these regions are within 30 minutes or so of where we were staying and will make for great future stops while we visit in Provence.

We also enjoyed a surprise in a discount Bordeaux that Marc bought on a whim. I wrote about our visit to and tasting in Chateauneuf-du-Pape for The Unreserved last week. The only bottle from that post that I will revisit here is the Barville Vieux Marc because it was just so amazing and unique. 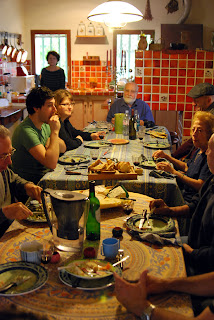 For the first meal we had Francoise brought out two bottles La Ferme Saint Pierre Roi Faineant (Lazy King). One was from 2007 and the other from 2000. I immediately recognized a great experience in the making. The same producer and style from two different years! The younger wine was definitely juicier and fruitier with less earth and wood showing through. The color was more vibrant of purple and ruby red, where the older was shifted a bit to brown as you would expect. This wine is made from a blend of 60% Syrah, 30% Grenache and 10% Carignan and is aged for 1 to 2 years in oak. Both wines had strength in their noses, with slightly different wood and spice characteristics, and smooth tannins. I picked up flavors of blackberry, black pepper, tobacco and herbs. The 2000 bottling traded down the fruit flavors for more smoke and earth and a bit more elegance in the tannins. It was just as pleasing and the contrast with the pork we had it with was exactly what I expected.

Most of our wine consumption occurred during lunch and dinner and of course at the two wedding parties. We did enjoy aperitifs most of the days, which generally consisted of pastis, some Jack Daniels brought along by my Cuban friends and the Muscat and Rose wines we bought the first day.

In one of the gift shops at Fontaine du Vaucluse we picked up the Pomelo 2009 Cotes du Ventoux Rose and the Cristal Or Muscat Beaumes De Venise 2009, which were opened later that day to be enjoyed by all. The Pomelo Rose presented with a beautiful red/pink color and a nose of strawberries and citrus. It is dry and strawberry flavor was very reminiscent of my first attempts at strawberry wine that I found just a tad too dry. There were also hints of exotic fruits, like mango, and the citrus didn’t feel straight up like oranges, but I didn’t spend enough time to classify it. The wine is very light and at first the dryness seemed to keep people away, but it did finally disappear. The Cristal Or Muscat was absolutely delightful and Margot’s favorite of the trip. The wine glimmers of gold and the nose is enough to captivate you, projecting aromas of peach, apricots and grapes. It has a perfect balance of sweetness and acidity and the alcohol is present but restrained. The flavors of peach, apricot and honey are full on and as an aperitif this wine was excellent. Carla tried a sip and it stopped her mid-sentence. Margot assured her that was the intended effect, and then the conversation resumed.

At a later meal Francoise produced a bottle of Chateau Fortia Chateauneuf-Du-Pape Blanc 1993. I had never had a white from the CDP region so I was excited at the prospect. Unfortunately, and Francoise and Eloy were quick to assess this, the wine had past its prime drinking days and was not an exciting drink. It was interesting thought to sift through the deconstruction of the aromas and flavors to try and assess what it might have tasted like years earlier. I have it tucked in the back of my head to find a good CDP white to try so I can experience it as it should be.

As the group at the house increased in size and then for service at the wedding the wines of choice were in box format. I thoroughly enjoyed the first box that came from a producer (that I didn’t get the name of) in the Gigondas region. The wine was bold and full of fruit, spice and showed a good deal of alcohol as well. It was from 2009 and while there was the clear presence of wood, it wasn’t a leading aroma or flavor. The tannins were a little rougher here but with the wine flexing a bit of muscle I didn’t mind at all.

The second round of boxes (10L no less) were all from Camille Cayran and of the Cotes du Rhone Villages style. I was struck with the exceptional performance of this wine. When I say performance I mean the quality of the drinking experience coupled with the knowledge of its bargain price. What a wonderful convention it would be here in the States to be able to go to a winery, taste a few wines and then ask to have large format boxes filled at bulk prices. This wine comes from the village of Cairanne just a bit farther north than the other areas I have reviewed wines from. The wine was moderately aromatic of black cherry, ripe plum and pepper. The flavors didn’t fail, with the black cherry and pepper from the aromas and a bit of spice, herb and maybe even violets. The tannins were moderate and smooth and the finish was long enough to enjoy, but not extended.

During our tour of the Papal Palace in Avignon we came across a small plot of vines (below right) that were there to showcase each of the 13 grapes permitted in Chateauneuf –du-Pape wines. The vines are young as the project is still early in its life, but I did have to wonder whose job it will be to make that batch of wine when the time comes! 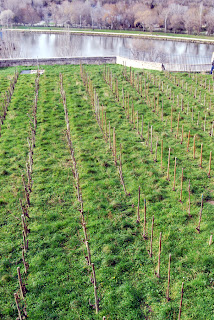 On Saturday during our trip to the Le Thor market we stopped into a local grocery/convenience/discount store. I bought a Cahors Malbec and a Cotes du Provence Rose, neither of which were very good. Sometimes cheap means cheap! Marc saved the trip though with two bottles of Comte De Serac 2007 Bordeaux. At just shy of 3 Euro each I was again struck with the performance. The wine was light and fruity with soft tannins and a good deal of vanilla. The fruit flavors of strawberry and ripe cherries were simply stated and washed down with a hint of acidity in the moderate finish. With roast pork this wine did not last long at all. Rather than take it home, Marc opened the second bottle because it was being enjoyed so much. For that I am most grateful.

The most intriguing thing I drank the entire time I was there was the Barville Vieux Marc 2002 that I purchased at the Brotte museum and tasting room. Marc is a French pomace brandy which is made from the spent pomace from wine production. The pomace is re-fermented and the low alcohol wine that is made from it is then distilled into a flavorful and potent spirit. My first glass of this was like being in another place altogether. The nose is huge of dried fruits and vanilla. The flavors of raisins, dried apricots and caramel with a hint of sweet in the middle were positively engrossing. I liken it to a blend of fine bourbon and aged Jamaican rum. At 86 proof it is quite strong, but for the audience I quickly found that was an asset and not an impediment. When enjoyed with a Cuban cigar I really felt like I had found a very specific and unique experience during my trip. 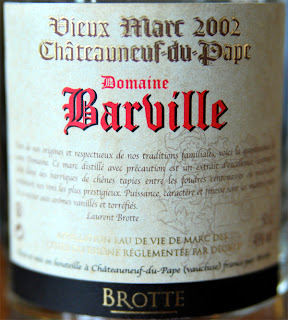 You can’t really argue how serious the business of wine is in France when there are places you go where you can see vines everywhere. 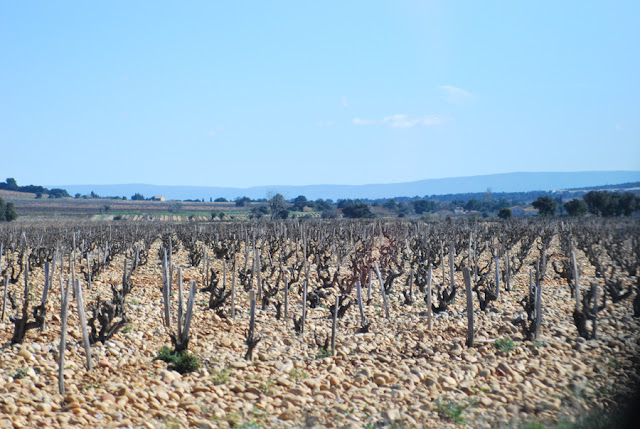 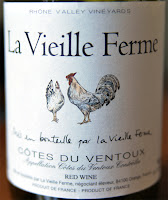 After we got home I found a bottle of the La Vielle Ferme Cotes du Ventoux Rouge that I had enjoyed on the plane ride over to Paris. We paired it with a Provencal style beef stew I made to help keep the memories of France alive now that we were home. With the familiar aromas and flavors of several of the wines we enjoyed while there I felt I was back for just a moment. One thing I did notice is that this particular wine, for an inexpensive one available at home, did actually smell and taste more pleasing that some other Rhone blends we have had recently, including the Chateau Beauchene from the tasting last Saturday. It would seem I need to explore the Rhone blends that are available to me and see if I can’t find a few that I would want to have around all the time.

Jason
Posted by Jason Phelps at 10:01 AM