A Rhone By Any Other Name

I am participating in Wine Blogging Wednesday for the first time this month, and having recently returned from a trip to the Southern Rhone valley, the topic for installment #71 of the event is fitting. “Rhones Not From The Rhône” is this month’s topic, offering a pretty broad space to work in. Wines made from any Rhone varietal, or several, but not made in France ‘s Rhone valley was the charge. The wine could be white, red, pink, a varietal bottling or a blend.

What’s the big deal with Rhône wines you say? If you don’t know the wines at all it might be hard for me to explain it in a meaningful way, but I’ll try. If you are hardcore Cabernet lover, don’t sway from your beloved Chardonnay or are currently on a Pinot kick you might likely be missing something. Nothing is wrong with those wines, I drink all of them, but wines from the Rhone Valley (and those made from the same grapes and in similar styles elsewhere in the world) offer different experiences. The wines from the Rhone I most enjoyed on my recent trip were the red blends. Their complexity and breadth of aromas and flavors was captivating. I found violets up next to licorice and powerful combinations of smoke, leather and pepper that were definitely unique for me. Some of the grapes used in the Rhone are minor players, or are unused, elsewhere in the world. But from the Rhone you can experience them at their finest. These truths are known in other wine producing countries, like Spain and Australia, but are still emerging in the United States, where varietal usages of grapes like Syrah and Viognier are the norm.

I have actually made blends in this style at home three times in the last few years. They have added a nice diversity to my collection and have been strong crowd pleasers. The first two I made were from a Southern Rhone style winemaking kit that was primarily Syrah with Mourvedre. The most recent occasion was a different kit with Syrah, Mourvedre and influence from Grenache and other grapes typically found in the Chateauneuf-du-Pape blends. While the last one wasn’t as good as the first two, it has been a solid drinker and is almost gone! Suffice it to say that I am quite fond of wines made from these grapes.

For my wine review for #WBW71 I planned to taste and share a domestic Rhone style red blend. Finding one in a pinch turned out to be harder than I had expected, but that reality is notable as I will describe below. I searched for a selection from California in several stores with no luck. Unfortunately, I didn’t give myself enough time to source one that would require shipping so I had to alter my search. I had recently enjoyed a taste of the Penfolds Bin 138 GMS (Grenach/Mourvedre/Shiraz) and after a quick search found it at a nearby store. I certainly could have picked a varietal like Viognier or Petit Sirah and had several domestic offerings to choose from, but picking a blend gave me the opportunity to think back to the Rhone wines I recently tasted and see how one made elsewhere stacks up. 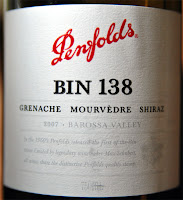 66% Grenache, 21% Mourvedre, 13% Shiraz
Garnet colored with some variation from rim to center. Pink/orange on the rim to garnet in the center.
Powerful aromas of blackberry, licorice, wildflowers and earth.
Spicy & juicy red fruits with some mushrooms and almost meaty flavors.
Sleek, with velvety tannins and a moderate finish.
The total package is assertive, but not abusive.

I could have sat and smelled this wine forever. I did want to taste it so I had to switch gears eventually. The structure of the wine is really notable. It is very sleek and focused, but not weak. The moderate acidity plays the role it should in the balance of the wine and demonstrates the beauty of the blend. This is definitely a different wine from those we tasted in Provence. It is juicier and fruitier than all but the youngest Rhone wines we tasted. The trade-off is more fruit for less earth, between the Aussie and French styles, but that isn’t surprising.

Interest in wine is exploding in the US so it might not seem like any one wine or style of wine would need cheerleaders, but Rhone style wines have them. Enter the Rhone Rangers, a non-profit organization that promotes American Rhone varietal wines. Qualifying Rhone Ranger wines do have to contain 75% or more of one or more Rhone varietals, which opens up many possibilities. The group sponsors tastings and educational events with member wineries all over the country. The membership is diverse with producers in California and Washington as you would expect, but also producers from the Central and Eastern US. Members include producers, growers, distributors, wine shops and fans. I recently joined as a Sidekick (consumer) member and will definitely be looking to visit member wineries when I am in VA and OR later in the year!
I suspect my difficulty in finding the type of blend I was looking for can be explained pretty simply. When it comes to domestic wines we are very varietally focused. Even with awareness of Bordeaux, Burgundy and wines from the Rhone I am betting that the knowledge of domestic Rhone style blends is less on the East Coast, where they aren’t produced, and shops don’t carry them or stock them heavily as a result. Writing about them and requesting them from the area shops will certainly go a long way to changing that.

I can’t wait to take a stroll through the other posts from #WBW71 and discover some new wines to try.

Jason
Posted by Jason Phelps at 10:54 AM

I discovered the Rhone varietals last year and became hooked! I really enjoyed reading your post. Have a great St. Patrick's Day tomorrow!

I am intrigued with this wine blogging wednesday. Wine is such an incredible journey and always an adventure. Great post.

What a trip it must have been to the Rhone!