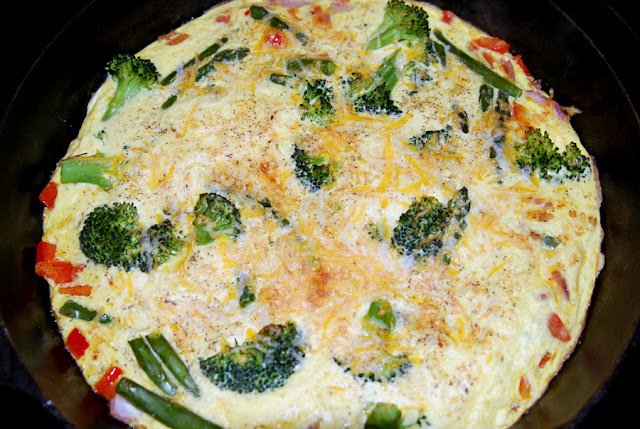 I love having what would normally be considered breakfast foods for dinner. I love how much easier those meals can be in comparison.

Last week I made a vegetable frittata that came out perfect. All the vegetables were cooked just right and the eggs for nice and puffy, but not to crispy on top.

Steam the broccoli and asparagus just until they were fork tender. Heat the oil in a cast iron skillet over medium heat. Set your broiler on high. Sauté the pepper & onion until tender in the hot oil. Add the garlic to an open spot in the center of the pan and quickly mix into the cooking vegetables. Add the asparagus and broccoli. Sprinkle the cheese over the vegetables and toss to mix. Add egg white to cover the vegetables evenly. Add salt & pepper if you like. Allow the eggs to cook just until they begin to bubble and you can see them have set underneath the liquid top layer. Move the pan to the broiler. Watch it carefully under the broiler until the eggs complete cook and puff up. It should be golden brown on top, but not too brown.

Allow it to cool for just a minute, cut and serve. One quarter of the dish clocked in at just about 3 Weight Watcher points for anyone who is considering how the dish fits into an active diet regimen.

And there you have breakfast for dinner!

Jason
Posted by Jason Phelps at 6:53 AM

I love a good frittata... though after a certain point in the day, I have to move away from breakfast foods and onto other things... just a weird thing I have with breakfast.

Question: what would you drink with a frittata? Wine/beer?

Breakfast for dinner...dinner for breakfast---it's all great with good food! As for the drink--I say either a really light white such as sauvignon blanc or steel cask chardonnay or beer. Heifeweizen, good lager or IPA. I'll turn the question around to the drink expert--do my suggestions work?

I love breakfast for dinner. It is often a go-to when we are out of most food or just too tired to think. As to Brian's question, I could always have a glass of bubbly with my frittata! :)

I love the conversation that this post got started!

You could easily pick something from both the beer and wine categories, with one hitch. The asparagus can contrast with some of both in less than happy ways. Sauvignon Blanc and Champagne and Sparkling Wine will both work very well for wines. A Gruner might also make a nice crisp yet fruity play her too.

For beers a Hefe will be a great choice. The mild flavors and clean finish will help keep things vibrant. An IPA migth work, although only if it is a bit more subtle on the hops. Othwerwise I think it might overpower the dish. I'll drink it afterwards though! A Belgian White might also work. The added citrus and spice could add a nice dimension.

A less typical pairing might be a glass of a good dry Vermouth on the rocks. The layers of herb and spice flavors with the dry and crisp palate should meld well with everything going on in the dish.

I always have breakfast for dinner, we do pancakes every wednesday and always an egg dish some other night. Lovely recipe.

Is the lager for breakfast breakfast as well? Can't seem to go wrong with this frittata!! Or lager.

Breakfast for dinner is the greatest! This sounds so good!

I love fritattas! And I love that you packed it with all those veggies... healthy and delicious.

Best thing ever...breakfast for dinner. Even better using egg whites with great choice of veggies....Great recipe:)
And cheese...cheese is the must:)

I'm always down for a frittata! Any meal of the day! This one looks really lovely; I've actually been trying to work up a healthy egg white frittata for a while. Totally trying it.

I love breakfast for dinner - pancakes, eggs, fritatta...We're having portobello mushrooms stuffed with scrambled eggs for dinner later this week.