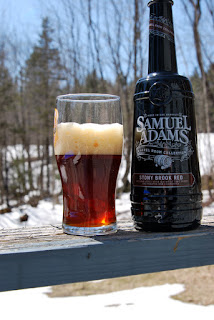 The Boston Beer Company (brewer of Samuel Adams) is small by commercial beer standards. If you look just at craft, artisanal and other small batch brewers they aren’t as small in comparison, but their total output is still just a small amount of the total volume of beer brewed in the US each year. Somewhere along the way I have found that the beers in their regular collection don’t have the same pop for me as they used to. I’ll chock it up to expanded tastes as I taste more and more beers. That said, when I see something from the company that is new or limited production I often stop to take a look.
Enter the Barrel Room Collection. As the story is told on the bottle tag that hangs on each of the 3 Barrel Room Collection beers, the barrel room at the brewer is a place where special projects where oak aging play a part are done. Up until recently these beers were generally only enjoyed by lucky brewery visitors and didn’t last long. With the introduction of the oak aged Kriek, Stony Brook Red and the Tripel the Boston Beer Company is demonstrating awareness of the shifting tastes in beer by at least some oftheir customer base. All three of these beers are old world styles with considerable character and unique attributes in comparison to the normal Sam Adams lineup.
I took a Stony Brook Red with me on our last trip up to the VT house. The description of the beer is pretty straightforward, “Belgian Style with Tart Fruit and Toasted Oak Character.” An apt description, and easily surveyed with a sip.
It poured with a thick light brown head that stuck around. The color was red/brown and was bottle conditioned so some haze was visible. The aromas were big, with dried fruit, malt and wood all together. The tart fruit notes were easily detected, and reminded me of sour cherries. It is medium-body and seems sweet, but it isn’t. The finish is tart with citrus and a nice length that lets the flavors slowly melt away. At 9% alcohol it isn’t the kind of thing you would want sit around and drink several of (oh I am sure I could) but I could see this making for a great aperitif amongst friend and definitely a strong pairing tool with stews, braises and BBQ.
The beer has a story that comes with it, but the story of when I drank it will complete your appreciation of a well timed drink.
Spring comes to VT slowly, and often in fits and starts. A step forward one week can be made many steps back by a freak snow the next week. Catching a warm sunny day in April is luck, and being able to sit on the deck for a few hours and enjoy a really tasty beer is a joy. There is still considerable snowpack and the breeze still brings a coolness from time to time. This beer paired with both worlds, having the strength and flavors to provide winter warming but also the tartness and fruit to evoke thoughts of warm weather and backyard parties. I killed the whole bottle sitting in the sun and I couldn’t have been happier!
Cheers!
Jason
Posted by Jason Phelps at 7:06 AM