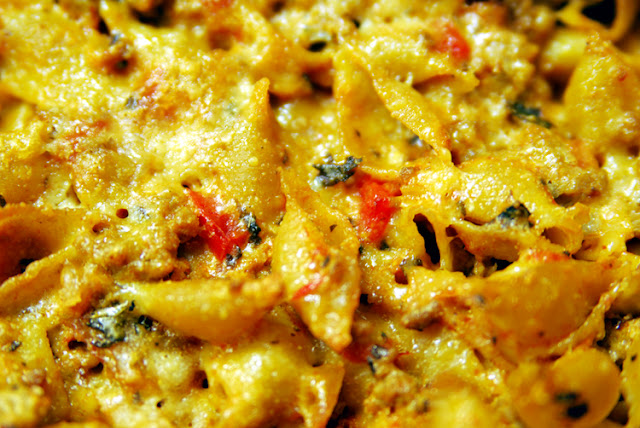 Very rarely do I make pasta at home. Margot is usually the one who does and that is maybe once per month. I never really developed an appreciation for it growing up and while I will order pasta when out at a good Italian restaurant, but I don’t often crave it and thus don’t make it at home. This makes Margot sad because she loves pasta, but she understands the issue; and there are many things she doesn’t regularly eat for exactly the same reason.

So it was with great surprise that I should want to make pasta and that I was going to scheme something up to use ingredients we had on hand to make something a little more than cooked pasta with sauce on top. My motivation was the open bottle of wine some new friends has left us.

What I ended up with contains most of what is in a typical lasagna but I used shells for the pasta. When everything was ready it was mixed together and spread into a baking pan and topped with parmesan cheese. It really was simple, and it turned out to be pretty light as well. Not a bad two-fer to get for a dish I don’t often make! 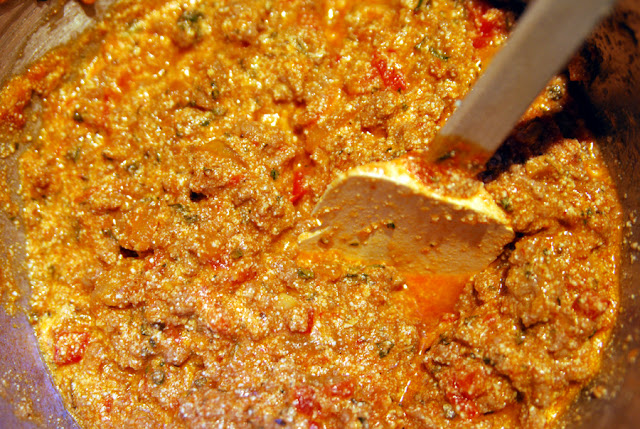 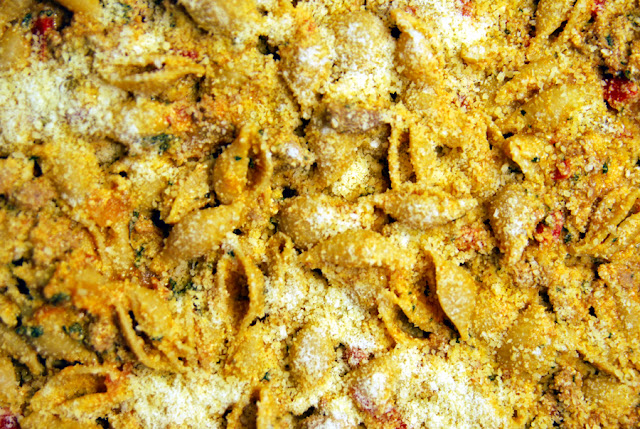 Bake until golden brown on top.

I served this dish with some olive bread sprayed lightly with white truffle oil and a very nicely crafted Dolcetto wine made by some of our new winemaking friends. It really was a fantastic pairing, and I found that Dolcetto lives up to its reputation similar to that of Chianti for being an easy drinking and very food friendly wine.

Newsflash! I made pasta for a second time in the same week. You can only imagine how excited Margot was. My friend Wayne mine broke his collar bone skiing the same day as I made the first dish, and we made something a little different on Wednesday to take over for a visit. I saw a recipe for “Greek Mac and Cheese” at Kate’s Kitchen and remembered I had a wine from Santorini hanging around, so Greek dinner it was! We all loved the pasta, and Wayne & Meredith really appreciated not having to prepare dinner for one night. Wayne is getting around good, but he needs to try and heal up so his activities as an outdoor adventurer and musician are not permanently derailed from this mishap. I am going to review the wine in a separate post but head on over to Kate’s Kitchen for the recipe for “Greek Mac and Cheese”.

This sounds really good and easy right about now. It's perfect because we usually have everything on hand to make it! Thanks for the idea.

I like the looks of this...the wine pairing sounds good too! I usually mix the ricotta with the egg and parmesean then layer it with the shells but I'm loving what you did here by just mixing it all together. One less step works for me and this looks like a very flavorful casserole without a ton of oil floating around. Delicious and now you have me craving pasta. Thanks for sharing.

Man this looks good. I share the same thoughts when it comes to pasta. Its my wife's favorite food group and I am not the biggest fan. On occasion though I make her just as happy...

It was so exciting to get some much buzz so quickly for this last night. It really was as good as that buzz hypes it. Margot is already asking for me to do it again!

Gotta love a good pasta dish :) I think this sounds fabulous and something that could easily be whipped up after a long day at work!