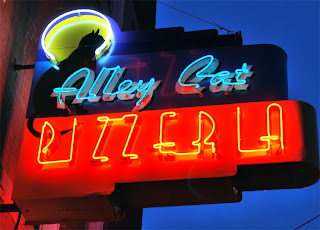 There are those places in every town that you always here buzz about. “Oh, you have to go.” or “I cannot believe you have never eaten at.” Alley Cat Pizzeria in Manchester NH is one of those places. This is the pizza place that many in the area say is a must go to. They have won Best of the Best in the local HippoPress for years. So, as someone who is searching out great pizza places to blog about in New England this one in my hometown seemed like a no brainer.

We purchased to large pizzas, one mushroom and one Stray Cat. I always like to try a simple topping along with a specialty when trying a new place in order to get a real feel for what they have to offer. We picked up the pizzas and headed home on our 15 minute drive. The Jeep smelled wonderful and Jay and I had a hard time waiting until we got it home to dig in.

Alley Cat is known for its super thin crust that is perfect for the NY fold in half technique. Our crust lived up to that super thin reputation. The crusts ends were nice and crunchy on the outside and soft on the inside and though thin it was not soggy. Both pizzas were light on the sauce, which for me is preferable when dealing with a thinner crust, less messy and not overpowering. The flavor of the sauce was somewhat unremarkable, beyond tomato there was not a lot of discernable flavors.

The cheese was the right amount, not skimpy, but not so thick that you could not bit through it. The Stray Cat specialty pizza had both mozzarella and ricotta. It was impressive that while the mozz was well cooked and slightly brown, the ricotta was not a dried out mess as can sometimes happen. The Stray Cat also included breaded eggplant, which was well cooked with perfectly toasted breading. The mushrooms on the other pizza were fresh and were a nice size. As for seasoning on either, Jay and I did something we have never done, we used salt to kick up the flavor a bit.

As we ate our pizza there was a bit of silence, though not the normal silence that accompanies the devouring of pizza. I think that Jay and I were both trying to find the words to describe our experience. The build up to the pizza at Alley Cat had been so strong and so big. Best pizza in the area, the pizza you would travel for, you have to try it! I am not sure if any pizza could have lived up to the hype, but was the hype causing our reaction? Maybe. When we finally spoke our conclusions were in agreement. Alley Cat Pizza is very good, unsophisticated, pizza. It is the pizza that you remember from those late nights in college. It is the pizza that you may have eaten on your first date in High School. I guess one could call it nostalgic pizza. If you are in the neighborhood looking for a quick slice I would definitely recommend it, as it will not be dissatisfying. My goal now is to find a place in Manchester, which may not be getting the hype but leaves a stronger impression.