The quest to find new and interesting ways to use our CSA vegetables continues. Having received potatoes and zucchini again I was happy when I stumbled upon a recipe in Food and Wine magazine that used both. Jay and I were at our vacation house in Vermont last weekend and stopped at our favorite local farm stand, Dutton’s. Even though we are receiving quite the bounty from our CSA share, we could not resist. Having already found my recipe while leisurely reading magazines on the porch swing I knew we only needed tomatoes. Dutton’s provided some wonderfully red and ripe fresh tomatoes that were just bit ugly on the outside. As any tomato connoisseur will tell you the uglier the tomato the better!

The recipe was adapted from the one in the magazine. Since we had red potatoes from the share they were used instead of the Yukon Gold that were recommended. 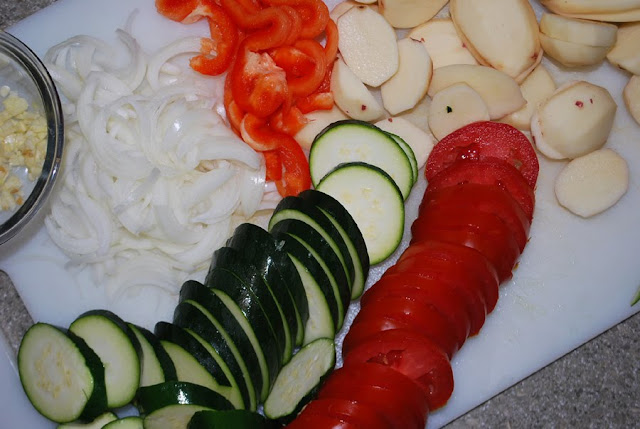 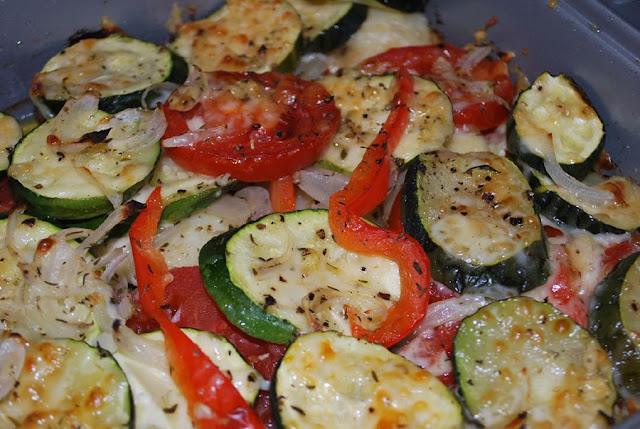 The recipe was delicious and Jay and I both enjoyed it paired with a few ears of fresh corn also from Dutton’s. The idea of cooking it on low heat covered with tin foil is wonderful. This made the vegetables, especially the potatoes, have a fantastic flavor. I think it came from being “steamed” in the olive oil so the flavor was infused throughout. When I make it again I will cut the potatoes slightly thinner than ¼ inch as they were a touch undercooked. Jay and I both agreed that the recipe really would only work with fresh tomatoes as the shipped and packaged variety would not have as much flavor and would leave the recipe lacking.

The next day I took some of the leftovers and chopped them up further. I than placed them in a heated skillet and cooked like a hash. When almost heated through I added a couple of eggs to the pan and cooked over easy. This preparation was even better than the original. I would definitely consider this recipe a must do, especially if you want a fabulous breakfast or brunch the next day.

Margot
Posted by Jason Phelps at 10:15 AM

I love my csa. Thanks for the recipe. There are just two of us in the house and it can be tough to use up all those fresh veggies!

Looks absolutely delicious! We made a dish from Food & Wine last night too. Hope to share it soon.
LL

now it doesn't get any better than that! Fresh veggies, simply prepared, roasted to perfection! I could have that every night! We have to take advantage of all these glorious local fresh veggies while we can....pretty soon they'll just be a memory!
Thanks for a wonderful post!

This looks really tasty. I'll have to try it and put some of my home grown courgettes in!

Good recipe. I would like to know all those different types of potatoes !! I'll have to travel in an exploratory potato trip!!

Margot - that looks wonderful! I bookmarked a recipe in The Olives Table yesterday that looks a lot like that. What a wonderful idea to use the leftovers as hash! Happy Sunday :-) Kate (Kateiscooking)

Hi Jason, your veggies look so good and I love that you paired them with corn! Lol,How about a glass of Chardonnay??

I love all those awesome summer veggies! What a great use for them :)

Thanks for all the great comments and buzz everyone. Eating more veggies this year has provided a great platform for exciting recipes.

@All That I'm Eating - we had to look courgette up. Different word for zucchini. How cool!

@Pacheco Patty - I think that would work nicely. A little oak to pair with the roasted veggies!

Mother Rimmy - that is something that we have struggled with as well. One can only eat some many salads and grilled veggies. I loved this recipe mainly because once it is cooked there are multiple uses....like the hash I had the next day.
Chef Dennis - thanks for the kudos and I agree that roasted veggies are the best!