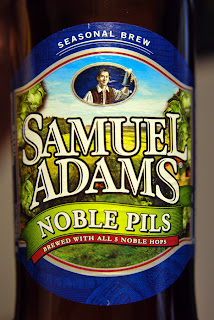 I saw the Sam Adams Noble Pils show up in the grocery store last month and although curious about it, I wasn’t prepared to sink the cash for a 6 or 12 pack of it. Sam Adams beers have not been bringing me as much joy as they used to. Several of the seasonal /limited release beers, the Cranberry Lambic & Chocolate Bock for two examples, have lost some of their punch as their volume and availability has increased. When I came across a bomber of the Noble Pils for $2 it made me more willing to give it a whirl.

That fact that it is brewed with all 5 of the noble hop varities, Hallertau Mittelfrueh, Tettnang Tettnanger, Spalt Spalter, Saaz, and Hersbrucker, is what caught my attention. I have no idea if I have had all of these types in other beers, but I doubt I have had them all one sip before.

The Noble Pils is a relatively new seasonal Beer for Sam Adams, having won the 2009 Beer Lovers Choice award. It is released in the late winter when New Englanders (thinking Boston is where Sam Adams is based) are more than ready for spring to set in and are turning to drinking lighter and refreshing beers.

Yellow/gold in color.
Thick white head and light lacing on the glass.
Complex hop aromas of herbs and citrus.
Very light flavors of grains and ripening corn.
The hop flavors are well balanced and they don’t overpower the beer.
The acidity protracts the flavors on the finish; very refreshing.
I am not a big pilsner fan, but this is pretty tasty.

Though not creating a revival of Sam Adams for me, I would recommend this for springtime drinking. It is light, hoppy and refreshing, and when you aren’t looking for an incredibly complex beer this will satisfy your needs
Cheers!

Being from MA, I love Sam Adams, but I'm yet to try this beer. Thanks for reviewing!