Beer week continues today with a beer tasting I put together last weekend for one of my brothers-in-law and I.

Last weekend my sister-in-law Celeste and her husband Bob came to stay with us at the house in VT for the weekend. Bob tends towards lighter beers and his go-to is Bud Light. I think people should drink what they like so I am fine with that. I lean towards darker and hoppier beers and am not a big fan of the high-volume production light beers, so I don’t typically drink them.

Before I left for VT I stopped in at the Drinkery and picked up eleven beers that I hadn’t had (actually I realized I have had one of them) before. I went with blonde and pale ales, and lighter lagers specifically with Bob in mind. I picked selections from Germany, Spain, Quebec and from the East Coast, Central and West Coast in the US. They way I figured it, we could both sit down and drink slightly out of our comfort zone. We would each be coming from a different direction to beers that offer small production, light to medium body and flavors and something different. Margot and Celeste jumped in on the tasting as well and provided very positive feedback on a few of the beers. Here are the notes and stories from six of the them.

All of the pours were from 12 or 16 ounce bottles into small tasting glasses.

Cisco Brewers Whale’s Tale Pale Ale
Style: American Pale Ale
Location: Nantucket, MA
Pour: Thin white head that dissipates quickly, moderate carbonation
Color: Copper, almost clear
Aromas: Hops, honey
Flavors: Mild bread/yeast flavors with a hint of sweetness
Finish: Mild bitterness and citrus
Review: An easy drinker with moderate to low hop and malt influences. Refreshing but not overwhelming in any way. This was the first beer Bob mentioned a similarity to a “honey-brown” for. The full joke, which was on me, is a bit farther down. 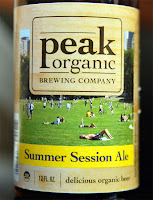 Peak Organic Summer Session Ale
Style: Wheat Session Ale
Location: Portland, ME
Pour: Minimal head with quick exit, obvious carbonation in pour
Color: Golden with a slight orange tinge, clear
Aromas: Citrus, grains, greens
Flavors: Grains, mellow hops
Finish: Tart with a bit of a hop kick
Review: A great summer beer, and one that I am glad I picked up. I have only had Peak beers at tastings before, and not this particular one, so knowing it is out there will mean I will be picking some up once the weather warms. Bob, Celeste and Margot all agreed that this beer was a solid lighter drinking beer. 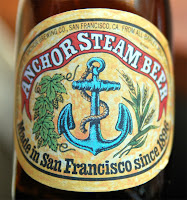 So we got about half way into the tasting and I noticed Bob kept comparing the amber and sweeter beers to what I clarified was the JW Dundee Honey Brown beer we find in some stores out our way. I realized that while it was true for some, he was messing with me. OK, I finally got it and it is pretty funny. I got a good laugh from the joke when we took a break and he broke out a Bud Light. I asked if it tasted like a “honey-brown” and he said “no, and actually it tastes like shit!” Celeste joked that I may have broken the Bud Light monopoly in the house.

Boulder Brewing Sweaty Betty
Style: Blonde Wheat Ale
Location: Boulder, CO
Pour: White head that escapes slowly, average carbonation
Color: Straw/yellow and clear
Aromas: Citrus, clove, banana, yeast
Flavors: Wheat/grains, lemon, creamy with a little head in the sip
Finish: Citrus zip at the end lingers
Review: This was another favorite, and for Celeste especially. She said something about it being saucy like her. Or at least I think she said that… She also said she would buy it just for the label which strengthens Margot’s long help theory that women by alcohol based on the label. I would definitely drink this beer as a lighter option to my normal malty/hoppy selections. 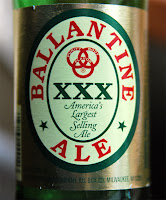 Ballantine XXX Ale
Location: Woodridge, IL
Pour: Small amount of white head, passes quickly.
Color: Pale gold color
Aromas: Mild, a little hop and a little grain
Flavors: Again quite light, a little malt and a slight hop bit
Finish: Clean and simple
Review: This beer is better than many of the big commercial competitors that it can be run up against and for that I have some laying around and plan to make a clone of this beer in 2011. It really isn’t anything special, but Bob did agree that is a bit more flavorful than Bud or Coors. Margot had has this before and bagged on another taste.

Unibroue Blanche de Chambly
Location: Chambly, Quebec
Pour: Thick white head and plenty of carbonation
Color: Dry straw color
Aromas: Yeast, citrus, spices, mild hops, slight sweet
Flavors: Sweetness in the nose is not in the body. Tart with honey and orange flavors
Finish: Bitter orange and clove
Review: I love the Unibroue beers so when I spotted this one I knew it had to be included. Bob was “ehhh” on it and I was not at all surprised. It is a lighter style of beer, but with the yeast, citrus and spices it doesn’t lack character which can take some getting used to.

I had a lot of fun discovering some new beers and figuring out that much of the brewing world can be boiled down to “it taste like a honey-brown”. Bob and I definitely has fun with this and the best quote of the day has yet to be shared. Come back at the end of the week for the other five beers and more goo laughs.

We were drinking Whale's Tale last night... love it! All of these are excellent selections!

Thanks, Brian. I love checking out the local brews and see who is doing what. Maine has a good concentration of consistently good beers.

I always get Whale's Tale when I go home to RI; good stuff! Tried Liberty Ale from Anchor? I find it a lot more exciting - kind of citrusy and hoppy...great selections all around! Def trying the Sweaty Betty, and looking forward to the last beers!

Thanks for the beer guide! My bf will love looking at this!