I’m in San Francisco for the Foodbuzz Festival and you know what that means, I’m going to be checking out the local and regional drink. Having such a specific focus might seem like a bore to some, but not to me! I came to San Fran to meet new people and do what I do best. I might be the Drink Doctor, I can take the pulse of a place by visiting a selection of its watering holes. And that’s just what I’m going to do. 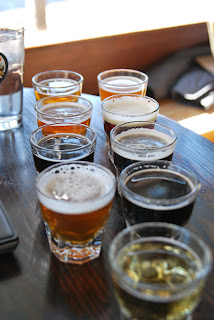 My first stop is at the 21st Amendment Restaurant& Brewery on 2nd street. Brewpubs almost always offer a beer sampler, and to me this is the best way to get a sense of the place. The windows were open so the cool breeze (it was unusually cool from what I gathered) was coming in right next to the table I snagged.

Gold/orange color. Hazy and unfiltered. Definite hop influence. Muted aromas but another massively drinkable beer. Much more bitter than the last (4x the IBUs) so it stands out.

I’ve found the smartest thing to do on the beginning of a beverage adventure in a new city is to ask folks at a nearby table. With luck they will live and/or work in the neighborhood and can help direct your next steps. Taking my own advice I chatted up a couple of guys at the next table and the through the course of the conversation I confirmed that two places already on my list, Tornodo and  Magnolia, are not to be missed while in town. Check! 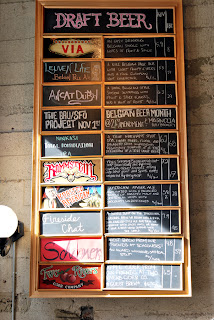 Medium brown in color with hints of red. Dark malts and a good balance of hops. Hints of funk in the mid-palate. Just enough roasted character to be notable.

Reddish brown color. Clear. Warm roasty aroama. Gentle hope flavor, but the hops come back on the finish. Some nuts and well toasted bread in the mouth. 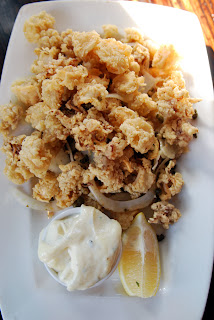 So what do you pair all these different beers with? Well, not any one thing, really. But the fried Monterey Calamari from the appetizer menu caught my attention so I went with it. I won’t profess to any pairing magic, but I will say that the calamari were cooked just right and were served with some fried capers which was new and interesting all to itself!

Medium brown in color with hints of red. Spiced evident in the nose. Slightly sweet. Palate of spices is very well balanced. Finishes solidly as a English ale with waning spice influence. The spices and the hops feel like they were supposed to go together.

Another guest brew. Anytime I find local cider on the menu I try it. But most of you already knew that.
Light gold in color. Gentle apple aromas. Crisp, dry and sparkling with tart apple slant I’ve come to expect from this style of cider. Refreshing, although the tartness is lengthy so the service temperature should be on the low side in my opinion.

I am going to go with the VIA and the Fireside Chat as my two favorites. The simplicity and drinkability of the VIA was very noticeable. The balance of the all of the components, including the spice, of the Fireside Chat made this beer work for me. I might even come back for one before I head home!

I've been to 21st amendment and I loved it! I went during the summer and enjoyed their watermelon ale. Amazingly, we were able to find it here at home on the East Coast, too.

Welcome to SF. Now that you are in town also check out Anchor brewery (http://www.anchorbrewing.com/) and Thirsty Bear (http://www.thirstybear.com/) as well. TB has great tapas to go with their fantastic bear. cheers!

Thank you for the comments. I enjoyed my time at 21A and ended up getting to 3 more places in town before heading home. With so many to choose from I know I have to come back!