Saisons for the Season 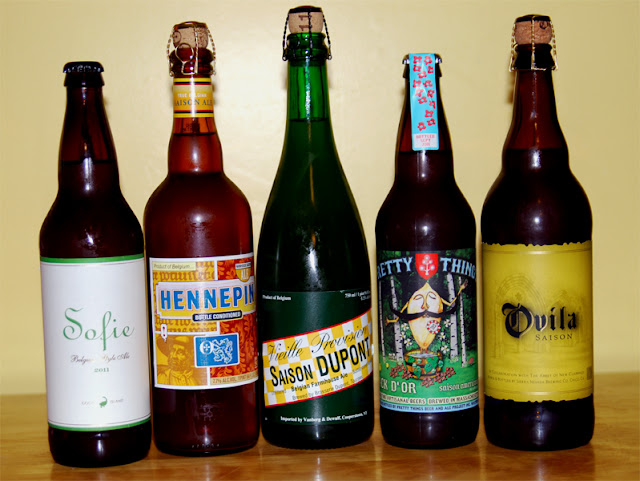 This isn’t a Thanksgiving (or even a Christmas) food & beverage pairing post. The title is catchy. I thought of it and decided to write a post reviewing several saisons that I would drink while cooking and hanging out on Thanksgiving Day. When I wrote this I didn’t even know yet what I would break out to drink with the multiple dinners for the upcoming holiday. On Thanksgiving day we did open up some homemade wine, but beers of several varieties won the day. I was hosting a beer drinking crowd so this was not surprising. The day after I served a menu of small plates, not themed for Thanksgiving, each with its own wine pairing. That’s for another post though.

My other reason for lining up a flight of saisons is that I plan to make a sour cherry saison this winter that will be done in time to celebrate Spring and Summer with. For that project I need some inspiration from commercially available examples. My life is hard!

What is a saison? First off saison is the French word for season. This style of beer hails from Wallonia in Belgium, and a French speaking part of that country to bring it all together. Brewed as farmhouse ales, saisons were originally brewed seasonally in the fall or winter for consumption by farm workers during the next planting and harvest seasons. During that time sources of potable water were few and brewed beer was safe to drink, contained some nutrition and was hydrating. Low alcohol levels in the original brews would have staved off outright drunkenness. Just a few historical facts that take us back to the beginnings of beer. Back to saisons however. Variations were available from many different brewers making the style somewhat broad to define. Modern day versions cover a broad range creating some excitement when trying new ones.

Saisons were historically brewed as pale ales and likely with a low ABV of around 3%.  Strong hop character was a foregone conclusion based on the need to cellar the beers for quite some time without the aid of refrigeration. The preservative qualities of hops and considerable acidity (sometimes through blending with lambics and prior year saisons) ensured the beer didn’t spoil. Most modern-day saisons are typically cloudy, golden in color with an off-white head. The nose will vary between different saisons, with a range of fruity, spicy, earthy/funky and yeasty often having moderate tartness and bitterness as well.  Darker versions are common enough (called biere de garde in France) to be notable. Likewise some versions will have a perceptibly sweet, rich and malty finish.

Saisons are typically sold in large format bottles, 22oz bombers, often with a cork and wire harness much like sparkling wine and champagne. Most are bottle conditioned and some labels will suggest what you should or shouldn’t do with the bottle sediment to ensure a good drink. Bottle conditioning also adds variation, with the level of charge and size of the bubbles of different labels to span a range.

Names of several highly rated commercial versions of saisons include Dupont, Hennepin, Sofie and Jack D’or, all of which we will taste and review here. I also have the Ovila Saison, a new product from a partnership between Sierra Nevada and Abbey of New Clairvaux, to try alongside the others. Selections from Fantome and The Bruery are on my list to search for to taste another day.

Pours a gold/orange color. Tall white head. Considerable sour and savory notes, herbs, drying grass, etc. in the nose. Sour citrus in the mouth followed by tart stone fruits. Dry with moderate funkiness towards the finish. Very effervescent, mouth filling in fact. Very smooth finish and a well balanced disposition. I’ve only had this a few other times and couldn’t recall them well enough to compare. The smooth finish increases the likelihood I would drink this anytime I found it. web site

Big funky nose. Short white head. I found hay, herbs, unripe fruits and spices. Margot said herbaceous and I can’t disagree with that at all. Pours gold and unfiltered. I picked up quite a bit of citrus in the nose and sour notes. Margot thought it came off as very hoppy which is consistent with my expressions of the nose. Mouth filling carbonation is a note we both made. I found the mouth to be considerably full with light malts and grains, almost like a golden ale. The hops came on big for me in the flavors with many green elements like grass, herbs, spruce and bitter greens. The finish is clean, albeit more bitter than we liked. web site

Pours yellow/gold and hazy. Tall white head. The complexity of the nose caught my attention right away. The fullness of the sour, fruit, yeast and malt notes in the nose was surprising. As you sip earthy notes show up very early and slip away in favor of dried fruits and citrus. The finish was like sour lemon candy. Margot felt it was more complex, very balanced and finished smooth. This was the most drinkable and the mutual favorite for both of us and one we hope to enjoy again very soon. web site

Pours orange/gold with a medium off-white head. Moderate sour notes to the nose, hints of green apple. Full bodied and fruit with a dry finish. Hops are present in the nose and mouth, but not very big. Not as complex as the others, aromas and flavors are not very deep is how Margot described it. web site

Pours hazy and gold. Short white head. I picked up some salinity in the otherwise sour nose. This beer is malty and grainy in the mouth with considerable prickly carbonation. Citrus and tart unripe fruits were the predominant flavors. The finish was very clean and smooth. I ended up rushing through this tasting and I didn’t get back to my notes when I shared the rest of the bottle with friends the next day. web site

Like with a lot of foodstuffs you have to want to like something to enjoy it. If you try saison and don’t like the style I won’t argue the point. Beverages of all kinds are designed to accentuate several key tastes, sour and bitter here specifically, and that coupled with textural elements like bubbles and tannins in beers, wines and spirits, create a lot of action for your palate. Any one off presentation and it could be the end of any enjoyment. Adventure does come with a cost. I love finding new beverages that channel their attributes in that way that I must pause and consider the tweaking of my senses that is going on. I don’t like everything I drink, the experience notwithstanding.

I was in the Boston Wine Exchange on Tuesday picking up the last of the saisons for our lineup. One of the staff was picking some fall beers to put in a holiday display. She asked what I was drinking and whether it was for Thanksgiving. I mentioned that I was picking up some saison or “beer drinkers Champagne” to take for a test drive. I didn’t commit to it being my Turkey Day pairing choice because in this case most of it will be gone before dinner!

With the moderate (or higher) carbonation, healthy acidity and range of flavors saisons are a solid utility player when it comes to entertaining, supporting both socializing and enjoyable eating. Having an all-sparkling-beverage party is a lot easier to envision when you consider beers such as saison. As an aside, dry sparkling cider adds yet another option increasing that potential further still. I’ll leave you with that thought as you ponder what to serve to your family and friends this holiday season.

Great post - I wasn't aware of the history behind Saisons.