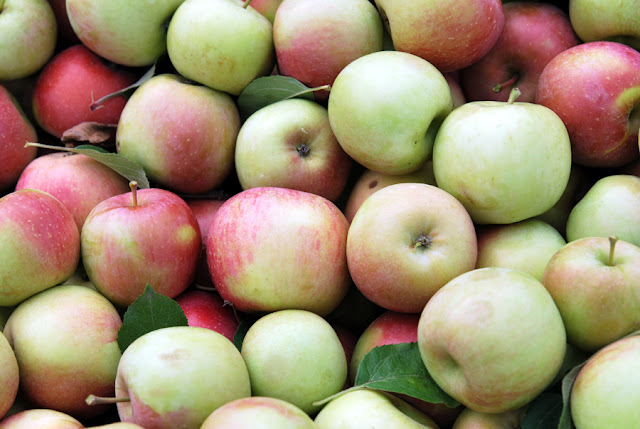 It looks like finally getting around to joining the BrewFree or Die homebrew club came at the right time. Group buying is one facet to homebrew and winemaking clubs, and when it works, it works really well.

Not long after joining the club I got a note through the club listerv about a group purchase of cider from Sunnycrest Farms in Londonderry. At the price we were quoted for the expected volume we would buy as a group, which ended up being 175 gallons, I calculated that I could buy four buckets for the price of three based on the price I paid in 2009. More liquid gold for the same money? Sign me up! 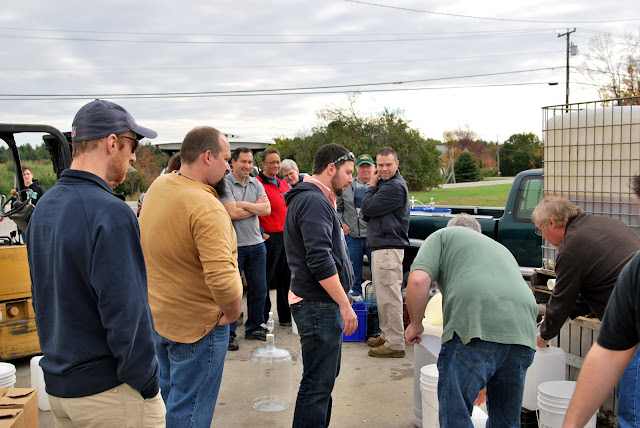 The day to pickup the cider came and club members from all over the southern tier of NH converged on Londonderry and stood around a raised tote filling buckets for several hours. There was much talk about people’s fermentation plans, what yeast, types of added sugar, do you sulfite or not, etc, etc, and there was plenty of laughter. 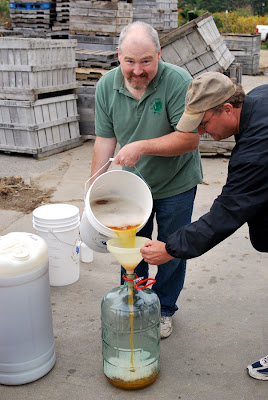 There was a healthy mix of experienced cider makers as well as folks trying their hand at it for the first time.With plenty of knowledge to be shared amongst those assembled, there clearly will be much anticipation built up as we all wait to share our creations with fellow club members.

The cider was pouring at about 46 degrees, which is too cold to start with so at a minimum letting it come up to room temperature before pitching any yeast would be expected. The gravity of the raw cider was 1.046 at 46 degrees and the pH was 3.5.

I also sulfite my sweet cider before using it to ensure nothing unwanted gets a chance to grow. A little pectic enzyme will also go a long way to help foster clearing later in the process. A good stir ensured decent aeration and with that my four buckets of cider would sit for 36 hours before any more attention was required.

As many of the followers of my wine, beer and cider projects have become accustomed, the story always gets more interesting from here. Fermenting four buckets of cider as is would produce a pleasant result, but it isn’t interesting enough for me at this point. So what did I do? 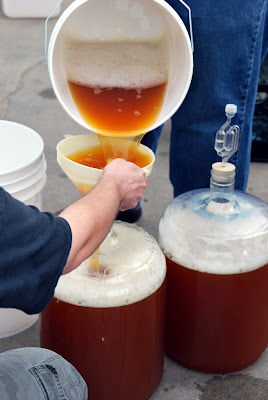 I always add more sugar, acid blend and grape tannin to my ciders. The outcome is much more like an apple wine, but don’t tell my guy friends who love the stuff. They might stop drinking it!

One bucket saw an addition of a gallon of B grade maple syrup and is fermenting with Trappist Ale yeast. Sounds crazy, but in reality I stole the idea from Crispin Cider after sampling a cider of theirs made using similar ingredients.

Another bucket had eight pounds of honey and four cinnamon sticks added to it. It is being fermented with a Sweet Mead yeast. My first cyser.

The two remaining buckets had their gravity increased with white sugar and are fermenting with traditional cider yeast. One will be made still and the other will be sparkling.

Fermentation is winding down for all four batches, but there is much more waiting ahead. Clarification of cider is a notoriously lengthy process, but I still have some from 2009 to drink so I can be patient!

Reports from other club members run the gamut from similar applications of maple syrup, honey, white sugar to brown sugar, amber brewing candy and all sorts of yeast types. The party we are going to have when everyone shows up with cider is going to be epic!

Jessica @Sunny Side Up said...

Hi Jason! It was nice getting to chat with you for a minute at the taste pavilion on Saturday. I can't wait to read more about your wine making and beer brewing adventures!