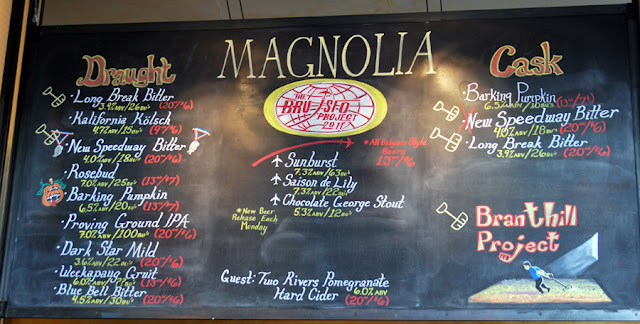 As I was doing my research to find a list of brewpubs and beer bars to check out in San Fran the name Magnolia came up several times. A bit of free word association got me wondering if it was anywhere near Haight-Ashbury and the famed San Fran neighborhood that spawned the Grateful Dead. If you don’t know the connection, read on, there is nothing I can do here. To my surprise it is located on Haight street a couple blocks away from the Ashbury junction and the cute little village you will find there today. Before I popped in I had to walk up to the see the Grateful Dead house. It may seem cheesy, but as I have said in recent posts, connecting the dots in our lives for our readers create far better stories than ”look at this recipe, it’s amazing!”, or “this bottle of wine is fantastic”, and them not backing it up with any tasting notes. But I digress.

Magnolia has enough reviews for it that suggest it is one of the top tier stops for beer lovers when in town. I also found that the beer bar Toronado, heralded for its 100+ choices, was only a few blocks away from Magnolia making the trip out that way from Union Square where I was staying well worth it. I’ll share my Toronado experience in my next post.

After walking up Haight to Ashbury and back, through a few wafts of marijuana and the glut of head shops, I couldn’t help but think back to the good old days. For some there was a time when a joint and the Dead on the stereo was like milk and cookies for other people. Don’t judge.

Magnolia has a busy street corner location making the window and sidewalk seating front row center for whatever action comes along. On the bus ride out I saw a naked guy wandering around and a fight. I figured based on that shit could go down at anytime.  It was busy when I arrived but I scooted under the high bar and grabbed the one empty stool along the window. I found myself next to a lovely couple from Berkeley, who were clearly knowledgeable about beer. I picked up several recommendations for my next visit from them! The one piece of information I did seize on to is their impression of the West Coast adoration for IPAs over Belgian style beers which get more love in the East. This was a new consideration for me, I’m equal opportunity, and one I will delve into a bit more later in this post. 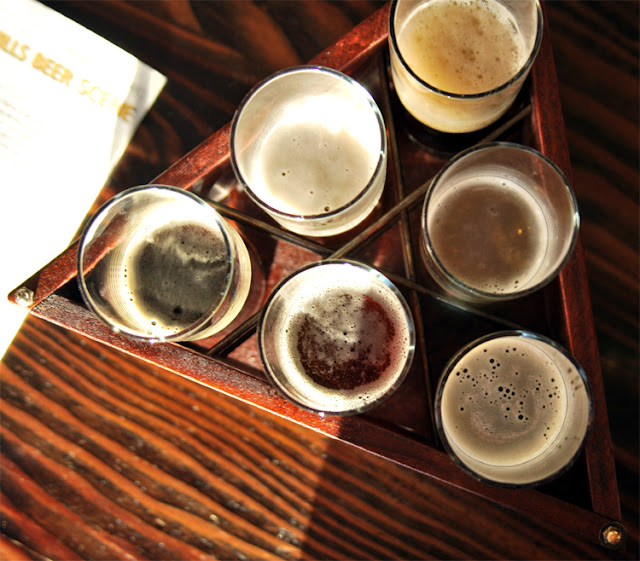 As is tradition I went for the sampler which included six brews of my choosing in a nifty triangular carrier, all served in tall cylindrical glasses for a touch of distinction.

Orange/gold color. Sweet, floral aroma. Brewed with rose buds. Finishes sweet with fruit from beginning to end. This was the first beer I recommended to the new folks to the table.

Gold/orange color, minimal head. Abundant floral aromatics. Very bitter and light in body. More hop flavor than malt flavor as expected. This is a big hoppy beer, but drinks light with fruits and flowers as the predominant aromas/flavors.

Toasted malts in the nose and mouth. Straightforward bitter. Hops are subtle, not much influence on flavor.

Medium brown colored ale. Moderately toasted malts with a clean and lightly bittered finish. I am starting to get this style more and more.

The Rosebud was my favorite and mentions are due for the IPA and the Dark & Mild.

The crowd turned over a bit as I moved through my sampler and two new arrivals grabbed seats being vacated right across the bar from me. They were also from out of town, Portland, Oregon specifically, and were in town to see a show. Looking back at my notes who the artist was is the one thing I didn’t get, and they mentioned it several times. It was either the beer or the nostalgia at work here.

I did get their names and not long after making their acquaintance I pegged them for the fun loving types. When Arin (right in pic below) ordered the Crackerjack Bacon for her and Rachael I took the opportunity to ask for them to pose with it for a picture. Cheers! And yes, it is literally Crackerjacks reheated with bacon. And it is surprisingly rich! The salty bacon with the caramel popcorn is as freaking sinful as you might imagine. I’m gonna be making this for my next party, Sandra Lee be damned! Sandra Lee didn’t really come up with this as far as I know, that is just a little inside joke for Shannon who had shared good laughs with over the weekend. I hope she’s reading. 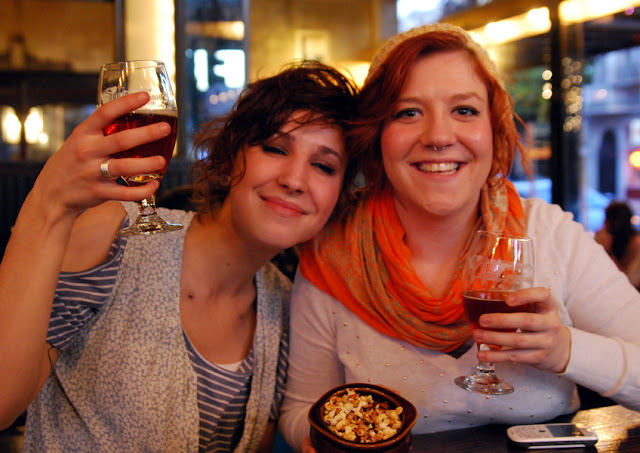 After I got home I did a bit of cursory research and the West Coast is hoppy beer heaven idea is commonly held and demonstrated. Not new of course, I just hadn’t ever given the stylistic differences between the coasts into consideration. I found lots of styles of beer in the local haunts, but there was a considerable representation from IPAs and hopped up beers. I drink them all so this only makes it more interesting to try the local styles when on the road.

I ordered the Cubano with Fries for dinner. Can’t beat a Cuban sandwich and beer! On my bus ride back to the hotel I was chatting up a couple of partiers and one of them mentioned that the food at Magnolia was particularly good for a brewpub and that the Cubano was his favorite thing. I guess I picked a winner. The pork on the sandwich was tender as it should be and the ham was salty and full of flavor. Served on fresh bread with crunchy pickles it was just the thing to balance out the beers. I hadn’t eaten since 10:30 (and it was 6:30 or so now) on the count of the gluttony from the Foodbuzz Festival farewell brunch. I ordered the Chocolate George Stout to go with my meal having killed off the beer sampler right before my sandwich arrived. The beers were doing their thing to be sure, including my forgetting to take a picture of the sandwich. The fries were pretty straightforward, pleasantly salted and hot. I’d come back to Magnolia for the food, and then stay for a beer or three.

The George’s Chocolate Stout pours as black as night with a light brown head. The aromatics were of roasted malts and just a little bit of chocolate and coffee. The chocolate flavor was quite subtle and yet another example for us to consider when we attempt to make a beer in this style again. The finish is clean and it transitions to slightly sweet to dry by the end.

The crowd thinned out a bit and a gentlemen in from Arkansas joined us. I didn’t catch his name (you sort of see what kind of night this was turning into), and Danny from the band Scars on 45 saddled up a short time later. As Danny got to know the group around him he realized I was taking notes and asked “what are you a fucking journalist or something” with his killer British accent. Yes, in fact I am a fucking journalist, and damn glad to meet someone who can make the work fuck sound so fucking good! He and the band were in town for a show. If only I had more time. I’m betting I could have maximized that meeting.

We had some great laughs, all of the out-of-towners appeared to be making a better go of it than the locals, and after finishing my beer I took my leave and headed out into the night. I forwent the bus in favor of a 15 minute walk to work some of my buzz off. Up next, Toronado!