My Thanksgiving in Three Acts

Filling the House with Smoke

Well, not literally. I can only imagine the crazy ideas you all just had about what went down at my Thanksgiving. I smoked a turkey. And that’s not anything new. But this time it came out damn good, my best ever. And it filled the house full of aromas of smoked meat goodness. 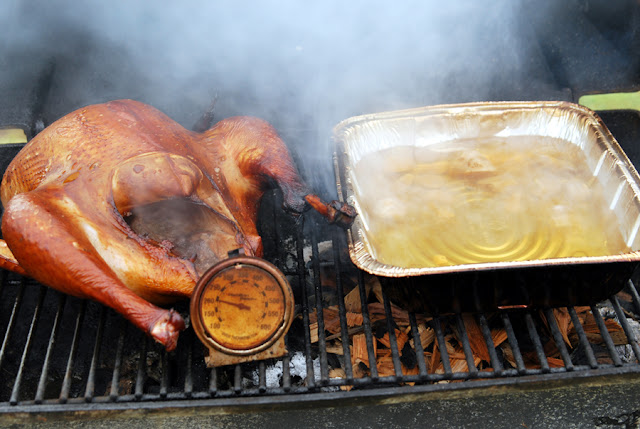 We also roasted a turkey and served both with the usual sides including, homemade cranberry sauce, a root vegetable gratin that wouldn’t be good until it was reheated three days later, mashed potatoes, squash, green beans, carrots, stuffing, bread and of course gravy.

Thanksgiving Day was all about laughs and good food. No fuss was made of wine pairings and we finished off the Saisons from the prior day before dinner was even served.

We finished the day with board games and homemade pie.

Say Hello to My Little Mojo

On Friday my parents came to visit for the holiday. I had planned a non-traditional menu for dinner to avoid any boredom with the typical post-Turkey Day fare. One of the dishes I made, they were all small bites/portions, was a Cuban Sandwich on a lettuce leaf instead of bread.

Several key elements came together for this plate to have made the impact it did. First, bone-in pork chops marinated in an orange mojo overnight and then slow cooked. Take a look at this little mojo.

Mix and pour over pork in a container than can be sealed and refrigerated overnight. Agitate several times during the marinating.

The cooked pork was topped with thick cut bacon that had been baked with melted brown sugar and Dijon mustard on it. The bacon alone was immensely flavorful and had a good spicy bite. I melted Gruyere over the two meats and then placed all of that on top of the lettuce leaf, pickle and a small amount of Dijon mustard. My take on a Cuban sandwich. Everyone said it was the best of the four courses I served. 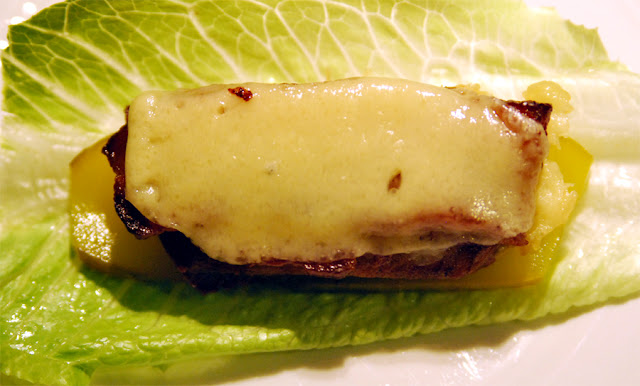 For the first course I served fish croquettes I made following my friend Kelly at The Pink Apron’s recipe. I deep fried them, I would normally use the oven, and served them hot, and with the dijonaise. Wow! Lots of flavor and the fish was cooked just right. The ones in the freezer won’t stand a chance at a party real soon!

I paired wine with each course, finding the Westport RiversSparkling Wine to be a keen match for the croquettes. I used the remainder of it to make several cocktails two days later with no loss of carbonation or flavor. Other wines from my own collection and my trip to Virginia were tasted with several courses.

I served an intermezzo course of grilled butternut squash & pineapple topped with Meyer lemon curd crème fraiche. I followed that with dinner consisting of slow cooked Asian style BBQ lamb, creamed corn muffin and an Asian-inspired slaw. I’ll save more on those dishes for another day.

If the Muppets Can’t Make You Smile, You’re Dead

The rest of the weekend was a bit of a whirlwind. I made three batches of mead on Saturday morning, look for notes on that project at WineMaker Magazine’s web site real soon, and we rung in the holidays with friends Ed & Jim and their house full of guests in the afternoon.

For the party on Saturday I made a beer & cheese bread dip that surprisingly pleased more people and went more quickly than I had expected. It was pretty simple actually. Sadly I forgot to get a picture.

Place all the ingredients, except the beer & bread in the Cuisinart and mix well. Slowly add the beer and mix until smooth. Refrigerate overnight.

Cut a cone out of the center of the round loaf of bread, much like taking the top off a pumpkin. Cube the removed bread and the additional load of bread. Using a spatula place the dip in the bread bowl and serve the bowl and the bread for dipping on a large platter.

We checked out the new Muppet movie on Sunday and spent a couple hours laughing over our shared Muppet memories. Margot and I both grew up watching the Muppets and we pondered over the self-reflection and contemporary relevance questions raised by the movie. We would still watch the Muppets now, it wasn’t exclusively for kids in the beginning, but over time I think the perception of the show and the movies has seen them relegated to the big pile of kid’s shows out there. Who knows, maybe this movie can reverse that trend.We laughed a lot and think most people our age could relate. 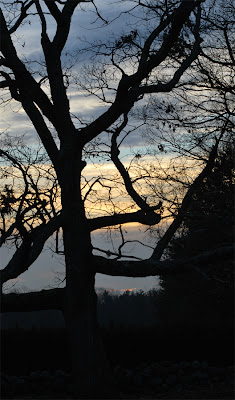 Thanksgiving is what you make it and clearly we made something of this one! The leftovers have been parlayed into nearly a week of different meals with a bacon and pineapple pizza making an appearance tonight.

We finished the weekend with a late day walk up to the old cemetery. The big, gnarly and leafless sugar maples set against the fleeting sun were a sure sign of where we are in the year, the weather notwithstanding!

I hope you enjoyed time with family and friends this Thanksgiving, and I wish you even more good times for the remainder of the holiday season. Happy Holidays!


Don't forget to enter to win a Spanish Wine Party Pack at http://ancientfirewineblog.blogspot.com/2011/11/wine-spanish-wine-party-pack-from.html
Posted by Jason Phelps at 8:51 AM

I am more turned on by your take on a cuban sandwich than I have been by anything in my life. That's either a strong statement about your cooking or my life.

Your bite sounds fantastic and like a great interpretation of the cuban sandwich. As I said in our email exchange I could easily eat a cuban sandwich every day of my life. One of my favorite things to do is to make a cuban sandwich inspired mac and cheese.