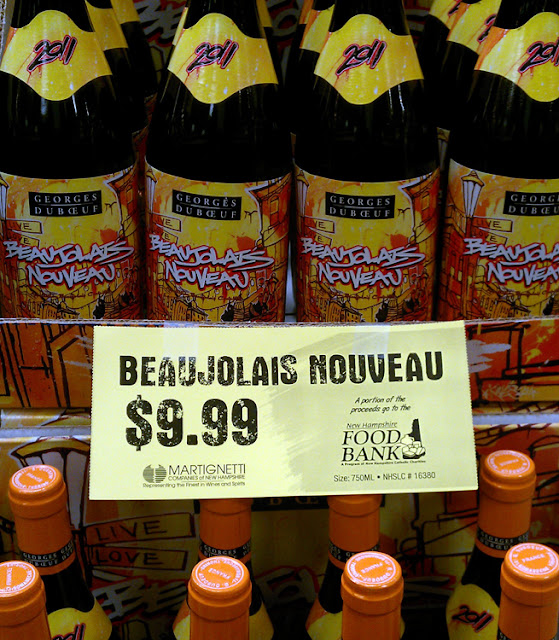 F*%K Nouveau! Whoops, somebody pissed in the pool, everybody out! Nope, I’m not gonna let that happen.

Nouveau Day 2011 (Twitter: #NouveauDay), the celebration of the current year’s Beaujolais Nouveau harvest & wine, saw the critics, the supporters and the revelers mixing it up pretty good. I heard and read points all over and on both sides of the love it or hate it question when it comes to Beaujolais Nouveau. I appreciate everyone’s position on the wine and the marketing party around it. I enjoyed the hang out because, and not in spite of all of it. And no, nobody has to tone it down. You have a right to your opinion and I say sing it proud. 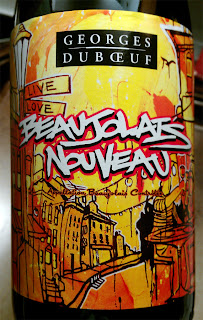 I try at least one Beaujolais Nouveau each year just in case I find one that for a short while might be drinking well enough to enjoy a bottle or two. That hasn’t happened but twice (2005 and 2009) in the ten years I have been tasting it, but there is so much variability in the world’s wines why punish this wine excessively for the same potential?

So far I have only tasted the Duboeuf art covered bottle and didn’t find it notable. The label is again a feast of orange and yellow, a trend of the last couple of years. During the live tweeting last night I didn’t get many responses to anyone drinking other labels so I couldn’t gauge whether there were others that would be worth a few bucks this year. The producer Bouchard Aine & Fils came up several times and I might seek that one out. If anyone reading had it please leave some thoughts in a comment.

The Duboeuf is intensely purple as expected. I was showing my friends at the Salon I go to (haircut during happy hour) what the wine looked like up against a piece of white paper. The lesson about that being a dead giveaway for a very young wine that might be super fruity wasn’t lost on a couple people.

The juicy fruit and candy like aromas were pleasant and consistent with the style. The wine was low in fine tannins providing little structure for the wine. Again, consistent with the majority of the years I am familiar with. The tannins of the 2009 and 2003 Nouveau’s were somewhat bigger and led to a more complete experience for me.

The wine is moderately full in the mouth and finishes a bit sour. Not quite balanced from nose to tail. There isn’t anything flawed about the wine, it’s just that it can’t have the finesse of most other wines with the short time frame for production. It is a great example of being what something is going to be. 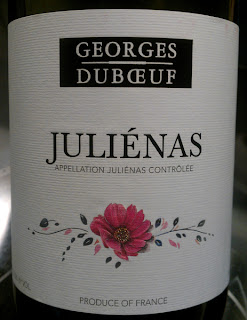 I broke out a bottle of the Duboeuf 2009 Julienas during the TweetChat and compared the two. I participated in Burgers & Beaujolais with friends earlier in the year where we shared a flight of Cru Beaujolais. A selection from Julienas was tasting pretty good during that event and I was happy to have an extra of a different bottle from that region laying around.

Yes there is nothing fair in this, comparing a Cru from a good year to the Nouveau, but experience is king and tasting them side by side and contrasting the differences in wine from same grape is instructive.

So the Duboeuf 2009 Julienas is ruby colored wine with purple tendencies and medium concentration. The nose is lively with fruit, some funky earth and a bit of oak. It is a dry, a more earthy than fruity wine in the mouth, with a long dry finish. I picked up strawberries in the finish. The tannins are reserved and structurally sound. The wine has a well balanced acidity and is pleasant to drink on its own. The distinctions of this wine or my favorite Beaujolais’s from Saint-Amour are clear. I prefer my Beaujolais to have the time to come into its own and a little finesse with age.

Beaujolais and Thanksgiving get asked about all the time. The timing of the release is certainly no coincidence. Here is a link to my first blog post about the relationship between the two, entitled Food & WinePairing #1 from Thanksgiving 2008. I don’t find Beaujolais to be a universal hit as a food pairing wine, but in good years like 2005 and 2009 I can see how it doesn’t take away from the food on your Thanksgiving table and thus isn’t memorable for having messed up your holiday!

Continuing the Thanksgiving tangent for a second. In that same post I also make an interesting assertion that there is a new domestic wine revolution going on with hybrid and cold-weather hardy grapes and how those wines make for better holiday pairing in my opinion. With three years of wine travel and tasting experience since writing those words I would say I was on to something. Many areas of the country are springing to prominence for their local, and not “California style”, wines made from lesser known grapes. I have paired wines made from those grapes grown here in New England with holiday meals several times with considerable success.

Do you Nouveau? The date has come and gone and over the next few weeks more wines will arrive for quick consumption. The new year’s Nouveau is worth checking out for the experience and also to get people riled up about wine. Sometimes that’s the only reason I keep doing this…

I completely agree. For me it's more about the hoopla, tradition, and festivities, and another excuse to share wine with friends. Nouveau is exactly what it purports itself to be, the first wine bottled after the harvest. It is fresh, fruity, and merely holds the promise and potential of what later bottlings can express more fully. It is not a wine to analyze and think about. Everything about it is up front and on the surface. Here it is already come and gone and in the end no big whoop.

Like so much in life, the enjoyment can be enhanced by adjusting our expectations. BN is what it is and should be enjoyed for it and not compared to the highest expression of the art all the time. That said, I don't think I would ever serve it at Thanksgiving. That would be expecting too much and I wouldn't want to put it under that much pressure. It wants to have a good time too.

I admit it--the blog title drew me in. I lived in France one year and happily celebrated the Beaujoulai Nouveau. I think resulting hangover lasted about a week. Ever since then I have completely lost my taste for the Nouveau BUT at least I have a great pre-hangover memory associated with it!