One Day in Sonoma

I can’t complain about the busy life I choose to lead. It is my choice, and when weekends fly by and I can barely remember the fun I had, it is my own fault. But, sometimes I use a time crunch to my advantage.

If there is one sacrifice to be made on a trip to Sonoma, my first trip no less, having only one day would scarcely make most people’s lists. Most destinations are like that, one day isn’t enough to do them justice, and a lifetime might never be if you leave your heart there. How did I rock one day in Sonoma?

I set out early, picking up the one day rental car at 7AM. I was staring back at the Golden Gate Bridge from Marin before 8. 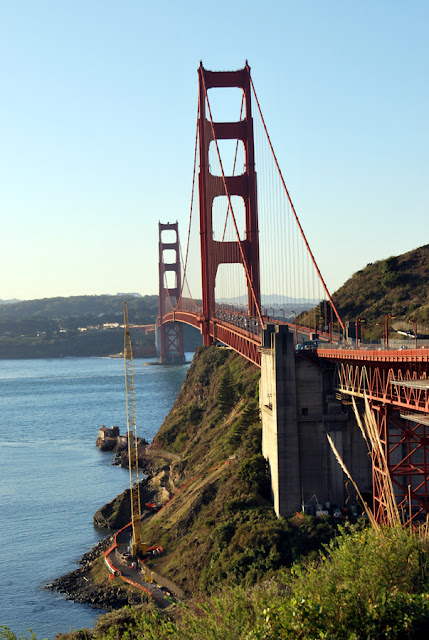 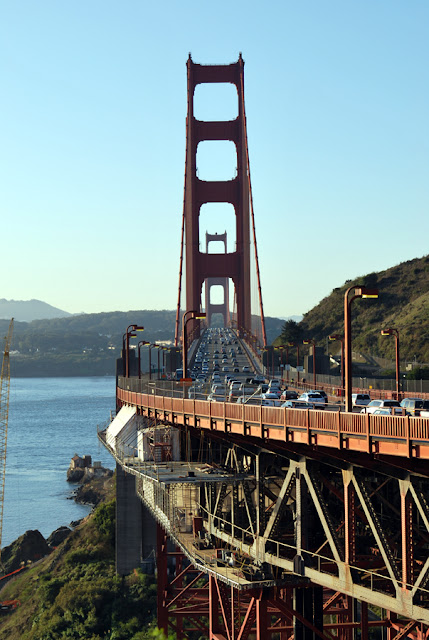 Back to that trip I took with my family in 1987. The Golden Gate Bridge was one of the city sites I was especially taken with. So many people are. Definitely a point of distinction for SF, part of the charm if you will.

I leisurely made my way toward my first stop at ClineCellars. I peeled off at the first Starbucks I could find and used the WIFI to jam out my Foodbuzz Festival Day 1 post.

I arrived at Cline shortly after 10AM. I planned a trip to Cline after Maribeth Doran, their Goddess of Wine & Social Media, participated in #winechat for Breast Cancer Awareness Month. Bottles of Cline’s Cashmere currently carry a pink ribbon and are linked to a donation made to Living Beyond Breast Cancer for each bottle sold. Nobody has to tell me or my family how important raising money to fight cancer is, we’ve been at it almost ten years now. It’s hard work! As a cancer survivor, fund raiser and volunteer I am dubious on some methods of raising funds, and retail promotion is one of the easily questionable methods; but I do thank organizations that support the fight and try to make their involvement worth the most with an extended relationship with a good charity. My thanks are due to the whole team at Cline for their continued involvement which has raised more than $200,000 in the fight against cancer. I heard personal stories in the tasting room, survivor to survivor even, and that means so much more on top of money raised and realities somewhere else.

Thank you Maribeth for arranging the good care I experienced during my visit. Lots of smiles and energy in the tasting room. 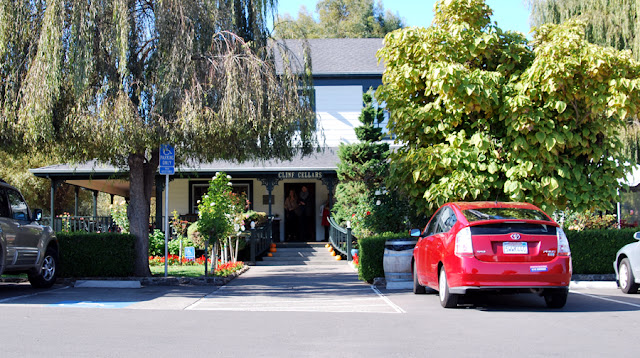 One of the experiences I have had several times this year is the tasting of a blend and the varietal bottlings of the constituent wines. At Cline the Heritage Zinfandel is made of wines from the Bridgehead, Big Break and Live Oak vineyards, each expressing attributes that when blended presented much differently than expected. I am particularly taken with this type of experience because of how much creative expression can be attributed to the series of tastings and trials that winemakers go through each time they haul in grapes and try to balance how to use everything they ferment. 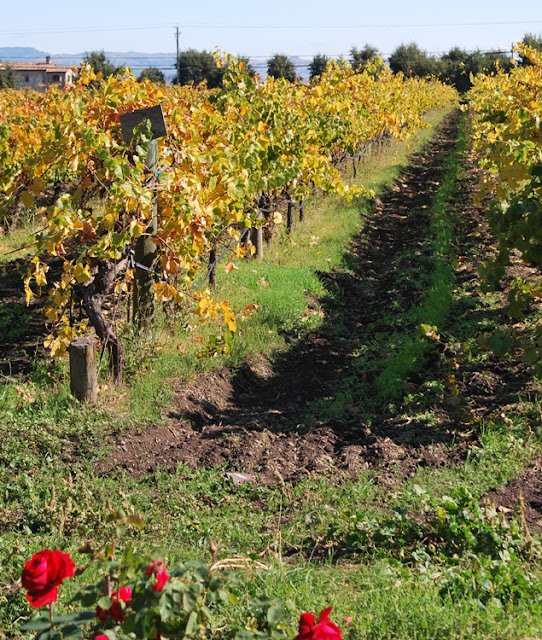 Cashmere is a blend of Mourvedre, Grenache and Syrah. The 2010 is still young with abundant fruit and spice. There was also a minerality component that was metallic in nature. It wasn’t a detractor from the wine per se, but it was noticeable. The wine drinks well and should see improvement over time. That’s only if the bottle I have in my cellar lasts long enough…

Something you must do if you only have one day somewhere, is move on. My trip would take me next to Rodney Strong Vineyards and my second stop of the day. 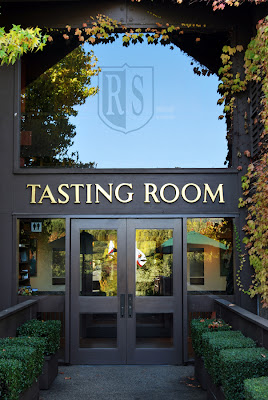 I met Robert Larsen from the Public Relations team of RodneyStrong Vineyards at the Wine Bloggers Conference in Virginia in July. The first meeting was at a tasting table and then I met him again in the evening as conference attendees met up, shared wines and networked. I had enjoyed the wines at the table earlier in the day and I was told then that there was a surprise in store for after hours. The surprise was that the Rodney Strong team had shipped along a blend deconstruction tasting (like the one at Cline) for their Symmetry blend. Based on what I said above, you figure I was pretty excited, right? Correct. Blending with friends at the counter was so much fun. The high quality of the constituent wines was abundantly clear. A range of richness, fruits and already finessed structures seemed so much for a pedestrian hangout amongst the industry set, but what the hell, we can experiment like anyone else! And, a little wine goes a long way, and we might have had a little more than a little wine….

During that trip I brought some of my homemade strawberry wine along and shared it the same night. The comment Robert made, and several others echoed that evening, is that the wine was straightforward, made well, and tasted exactly as it was described; strawberries. A thank you to all who wish to acknowledge my craft with so much as a word. It is/was an honor. During our Wine Bloggers Conference goodbyes I told Robert that I would stop by real soon and when the trip to San Francisco came to be, Rodney Strong was the first location I checked on! 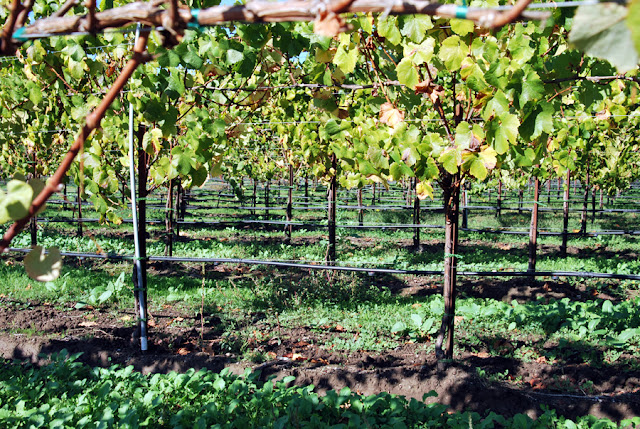 I met up with Robert again during my Sonoma visit. We shared some laughs about the WBC trip and my thoughts on the wines I selected for my tasting. I had picked the 2009 Pinot Reserve, 2008 Symmetry, 2008 Alexander’s Crown Cab and the 2007 Brothers Ridge Cab. Symmetry is where my biggest interest was and this being a newer vintage from my last tasting, there were differences. The 2008 is a little hotter than I recall, but it still expressed the earthy nose and vegetal character I was expecting. One bottle for home, check! If the 2007 was any indication this wine with additional age should taste even better. Both of the Cabernet's were big wines and already drinking pleasantly. The Alexander’s Crown is unfiltered and is a touch sweet, which complements the red fruits and oak spiciness well.

Great to see you again Robert! Thank you!

I like Cabernet. I have really loved it so many times. But these days, I am finding that I dig it only when part of a mutli-grape blend. I can’t really explain why.

The rest of the day was random. I say this because my destination for lunch was picked at random as I was in pursuit of it, and my final destination of the day had been picked randomly from a list of recommendations provided through a trusted friend. Of course I had to call ahead for an appointment, but it was random nonetheless.

I found lunch at Bovolo in Healdsburg located inside of Copperfields Bookstore. As soon as I saw the description for the Zucca flatbread pizza I knew what I was having. Roasted squash, Black Pig bacon, sage leaves and ricotta salata. I’ve already recreated something like this at home just because the flavors were that well paired in this dish. Sweet squash with salty bacon and sage. Adding the crust to the action, it almost tasted like a light stuffing. The bacon pieces on the Bovolo version were huge and full of flavor. 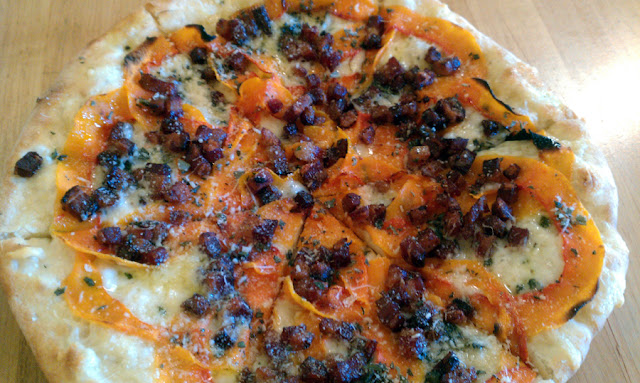 I had to rush through lunch, although the adjacent power outlet and a phone charge was welcome, because I really didn’t have but a couple of hours and I would need to be back on the road for SF. Afterall, I was dealing with an area known for lots of highway traffic, construction and all the minutia of the modern era that goes with it.

Michel-Schlumberger was recommended to me by Jolene Bonina (Thanks Jolene and Red White Boston for linking us!) after her recent trip to help with harvest in Sonoma. I didn’t know it from any other destination on the list. That’s what being a newbie does for ya! 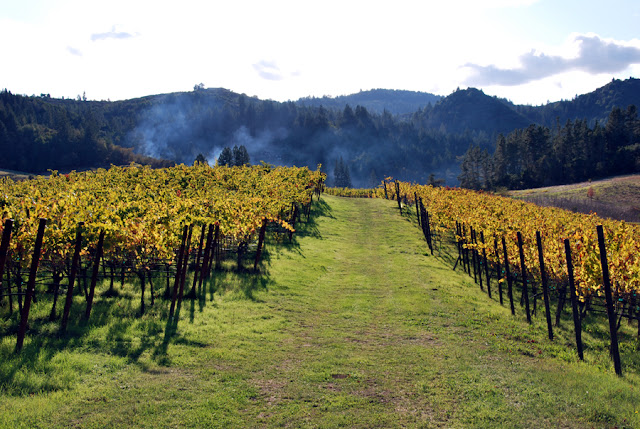 Michel-Schlumberger Wines is an absolutely beautiful place. The late day walk through the vineyards was a true pleasure. I snapped quite a few photos and several were the best of the trip. I didn’t take any pics of the building or the interior plaza where I enjoyed a glass of Pinot Blanc whilst waiting for the tour group to assemble. That’s a shame because it was great place to take it easy for a while. The dogs were very friendly, they know a dog person when they meet on, so I was having fun of a different sort. 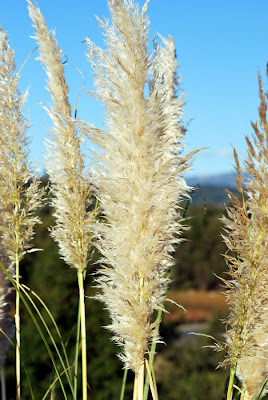 The 1991 Cabernet was drinking well for the age. The tannins were a bit more aggressive than what I would have expected, but were small and clearly softening, albeit slowly. A thick salmon colored rim speaks to the age this wine already has in. The aroma is best described as dried chilies. Quite tart in the mouth. The story with it being on the tasting menu was that a newer vintage of a different wine sold out through the wine club and the 91 Cab was selected from the cellar to replace it.

The 2007 Le Sage Merlot was a wood influenced nose, is medium bodied with abundant tannins and tart red fruits. The Pinot is also notable for the length of its dry soil finish with hints of spice. I love experiencing new wines!

I had to cut my time tasting short and head back to the city and to return my rental car. I did hit traffic, of course, and was cutting it close arriving when I did; but all was well. I and my memories were home safe. 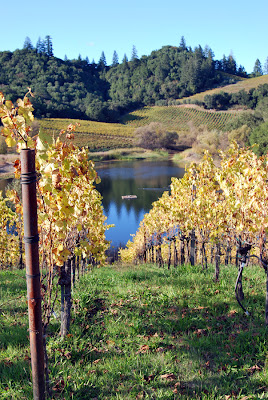 Sonoma looked exactly like I expected it to. The area north of Santa Barbara likewise looked like the agricultural and commercial area that I recall the California grape growing areas to have looked like 25 years earlier. I saw them then, I just didn’t care. I was 15 and didn’t drink, yet. That doesn’t mean there was no charm to be had. These agricultural areas also saw lots of almonds, olives and citrus orchards. All good stuff for exciting living.

Margot asked me if she would have enjoyed the places I visited on my trip. She most certainly would, and some more than others. The sub-urban and rural areas that can be found in Sonoma are much more our style and the place I could see us staying the longest. Mixing both wine travel, gourmet food and some outdoor adventure trips nearby, I think we could make a great go of the area more than once. Something to fit into the future travel plans.

I can also see how people can lose their heart in a place like Sonoma. It felt a bit like the times we have at our house in Vermont, where I leave a piece of my heart when I visit. The hours in VT are similarly casual and good food and drink isn't that far away. There definitely isn't as much wine in Vermont, but dragging along some of the cellar can make up for that!

And don't forget to check out Ancient Fire Wines on Facebook.

Great recap! Glad you liked Michel-Schlumberger! It is an awesome place. The house I stayed in this September was literally, 2 mins down the road. Gorgeous!

Hi Jason, thanks for the re-thread on my festival post. Wish I had known your face, I would have said Hi. Next time I will for sure, I promise. It's sad, but I still suck at twitter, not even sure how I saw it, lol. Lucky you stopping in Sonoma, I love that area and don't get up there nearly enough. Hope you and your family have a wonderful Thanksgiving.
-Gina-

My husband and I have always wanted to visit Sonoma. Good to read your post on it. By the way, have you done any guest postings? If so, let me know. Cheers! Heather