I came to San Francisco and the Foodbuzz Festival to meet new people, some I would know from Twitter and their blogs, and many others to whom I would be newly introduced and take time to share stories and geek out about food with.

Anything else that came of my time with the Foodbuzz community would be that proverbial bonus and the side trips I had planned before and after the festival are sure to lock in the trip as worthwhile.

The Foodbuzz Festival kicked off with a welcome reception and dinner at the Terra Gallery not far from the Hyatt which was the base for the conference. I chatted up a few folks on the bus as we rode to our destination and it was clear everyone was excited to check out what the FB crew had planned for us. Laura from Sprint 2 The Table and Sarah from Smart Kitchen were particularly interested in my beverage and winemaking slant. I was hopeful that my blog’s focus might resonate with the foodies I would meet.

Having the priorities that I do the first placed I headed to was the bar. I already knew that Bonny Doon and 21 Amendment Brewery would both be pouring their products, giving me lots of worthy options! 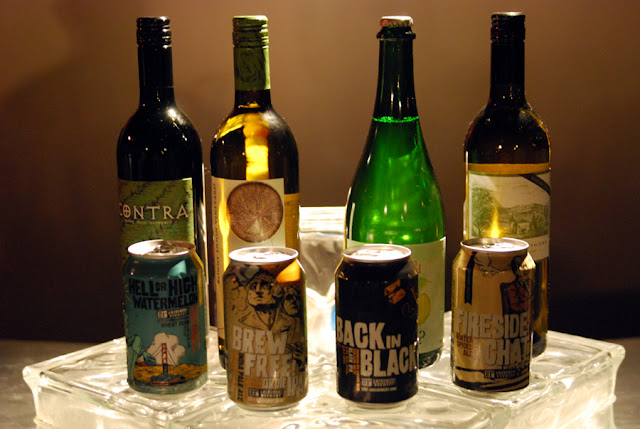 I started off with the Querry from Bonny Doon, an apple, quince and pear cider (maybe not specifically the right word, but it conveys the understanding) which I recommended to several other festival goers checking out the bar selection after arriving. It turns out cider is more of a solid common denominator for the foodie set than I had ever imagined. And that makes me immensely happy. I love cider, think it is underappreciated and can see it going places with more attention.

I wandered over to two friendly looking ladies, Kelly and Shannon, who had also just met. We started talking about the festivities ahead and the cider that we were all drinking. The cider pours cloudy with considerable carbonation and moderate white head, much like a golden ale. It is very nuanced with tart cider apples and some subtle spice influence, something I would characterize as like ginger. This product presents itself very much like a sparkling wine or champagne, making its appeal to women that much more clear to me. 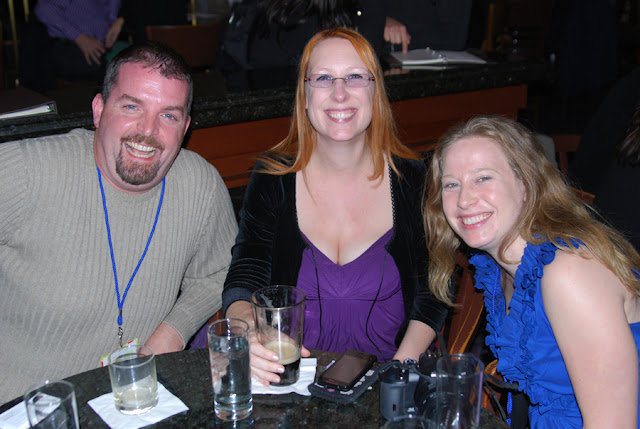 ( Me, Shannon and Kelly enjoying a late night drink. )

Shannon’s blog is named Killer Bunnies which I found hugely memorable and a great conversation starter. To find out that her blog is that of a vegan baker nearly made me piss myself. I came to find Shannon snarky, funny, irreverent and quite fashionable if her shoes on Saturday night are any indication. Shannon, I need a picture of your shoes to show my wife, she might think I was being creepy otherwise!

One of the meetups I was very much looking forward to was Meg Maker from Bonny Doon Vineyard. Meg also writes the blog Maker’s Table. The big joke was that we both live in New Hampshire and had to travel to California to finally meet. With a hug exchanged I introduced Meg to Kelly and Shannon and asked Meg to talk a little bit about the cider. We talked a bit and Meg moved on to work the room.

Kelly writes the Pink Apron and was equally interested in the time in SF to meet new people, check out the festival food and have some fun. Kelly’s admission that she worked in food marketing and that one account she supports is McDonalds inspired some interesting conversation about foodies and the foodie agenda. That conversation morphed into one about local food and how foodies and food bloggers can be so driven about the importance of local food but be so ignorant of the economic and accessibility issues that go along with it. My biggest concern is the one size fits all mentality where foodies push local food as an imperative that everyone must take up without recognizing how few people really care about the idea and aren’t in search of a solution to the perceived problem. As I always state with these comments, I’m not saying that this is right or just, but it what it is and more people pushing the agenda need to acknowledge it, understand that their passion may not be shared, and act accordingly.

I went back to the bar and grabbed a 21 Amendment Brew Free or Die IPA. This is another 21A beer that is pleasantly drinkable with plenty of hops and a little sweetness to balance everything out. And the name! Anyone from NH or members of our homebrew club Brew Free or Die can get with that! 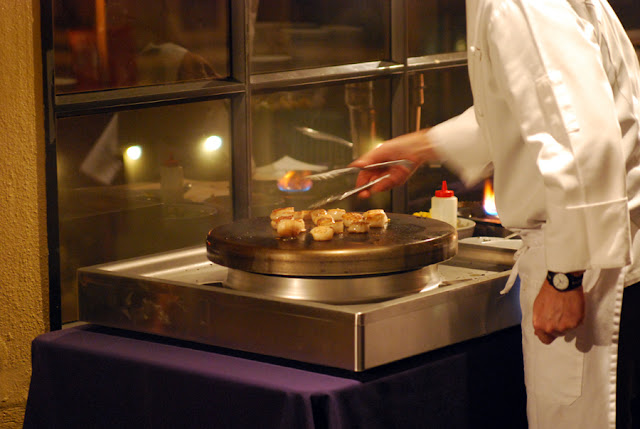 We transitioned from the reception to dinner and you’ll note I haven’t mentioned the food yet. That’s because I didn’t pay much attention to what of the passed appetizers I had consumed. The people were more exciting. Before moving on I grabbed a glass of the 21A watermelon ale thinking it might make for interesting pairings over dinner. 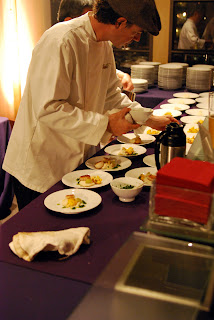 We moved upstairs found a table and hit the buffet lines to seek out some eats. The variety was broad with a wide range of ingredients and techniques. There were dishes made with scallops, pork belly, a beef stew, macaroni & cheese with bacon, lentil salad, beet ravioli and others. Many of the recipes were provided by Foodbuzz Featured Publishers, a great opportunity to share with the community to be sure.

The biggest challenge for the food was that because it was being made for so many people it didn’t have the charm that the recipes they were made from hint at. A few examples might help people contextualize what I am suggesting. The pork belly was lukewarm and chewy rather than soft. The lentil salad was absent of some spice and salt making it seem flat. The bacon on the macaroni and cheese tasted like Baco’s and I have doubts that it what was intended. I didn’t find anything that was outright bad, but I can’t gush about what I did have. When I get home I will take a stroll back through the menu and seek out any recipes that I might want to replicate at home. 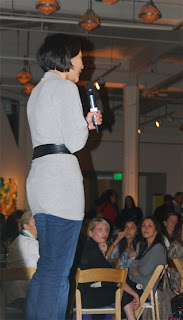 Jen from Tiny Urban Kitchen, and the winner of Project Food Blog 2010, shared  a bit about her journey in food blogging and what she is up to since Project Food Blog. Her primary topic was her motivations to donate her PFB winnings to charity. You can read more about her post PFB adventures in her recent blog post.

The Foodbuzz Blog Awards seemed to be very casually received and with the amount of talking during the announcements I can only think many people didn’t care. We were nominated in the Best Single Topic category and while we didn’t win I was the person in the room clapping the loudest for all the nominees and the ultimate winner. Being a good sport is an absolute requirement for authenticity. Shame on many participants for not being more engaging in the award announcements. There is a lot of talk about community and in this case I didn’t see it. Foodbuzz, you might want to scrap this activity in the future, I don’t think enough people care. 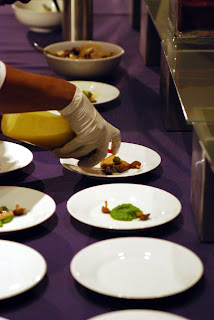 While I was mingling around I grabbed a glass of the BonnyDoon Contra, a red field blend of 6 different grapes. I found a nice mix of black fruits and earth in both the nose and mouth. I didn’t give it as much attention as I would have like, but then again I do know where to get some if I want to give a more thorough review!

We moved on to dessert which came off more positive from what I saw. Multi-colored macarons, truffles, mini cheesecakes and cookie sandwiches all got some thoughtful consideration. The most overwhelming feedback was on the pate du fruites, which from what I understand was massively sour. I didn’t try it and I’m not sure what result was expected, but the feedback I saw didn’t seem to make me think this was it. The most interesting dessert item for me was a chocolate hummus filled pastry cup. The savory aromas and flavors gave the hummus away easily. The presentation was oddly reminiscent of refried beans, which certainly is an interesting twist. With a little less sugar the filling could be used in a savory dish where chocolate was a good fit. This versatility gave me a few things to consider. 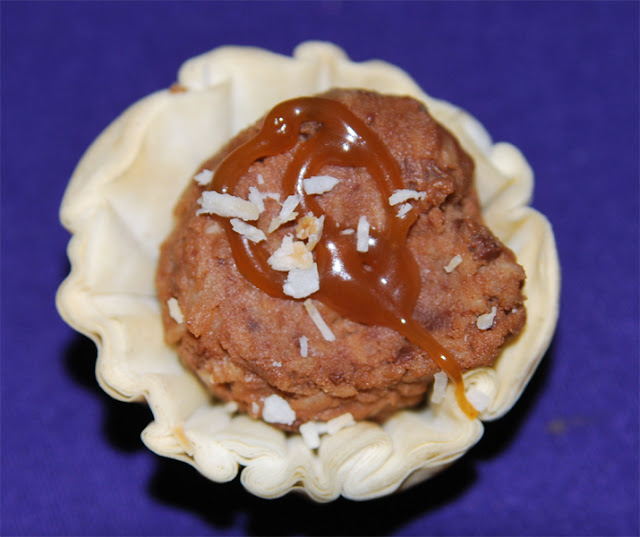 Over dessert I shared a bottle of my own 2010 Strawberry wine with my tablemates including Monica, Debby, Joshua,  Allie, Shannon, Kelly, Dorothy, and Cynthia. Sharing the fruits of one my passions with new people is always exciting for me. I love feedback and collecting impressions from new tasters offers me information that is crucial for better understanding my own wines. I was honored at the positive feedback and the mentions I got in the wrap-up of several of the tasters the following day. Check out Shannon’s kind words in Foodbuzz Was Fun Last Night and Cynthia’s Facebook pictures from the table.

The event wound down and I boarded the bus headed back for the hotel. Earlier I had thought some form of after-party would have been fun, but as I got closer to the hotel I realized water and TV was going to be enough to see me off to sleep. Having been up for almost 20 hours and knowing I needed to rest up for day two, this plan didn’t bother me at all.

Thank you so much for the post Jason! I went the last two years but was unable to this year :( I think I agree with you that the awards part was the least interesting part for most participants in previous years, lots of talking and not many people caring.

It was great finally meeting you in person and I enjoyed our walk around the block (yay sunshine!) before the Tasting Pavilion opened.

t was so nice to meet you! Thanks for the shout out. I felt similarly about much of the food, but really enjoyed 21st Amendment's offerings and those macaroons served for dessert. Sad to have missed your strawberry wine! Cheers!

What a great recap! It is true, I'm so irreverent and I hope that other new visitors to my site see the sharpness as entertainment not personal jabs. However, I don't like to portray myself as a brand or an agreeable persona so the dorky bits and such are all real life (as you have witnessed!).

It was great to meet you too. The sunny walk around the block was just what I needed before heading into the food and drink again!

If I come next year I think I will need to bring a whole box of wine. So many people seemed interested after hearing me talk about my winemaking projects.

Nice to meet you!

Margot hasn't looked at the pic yet, but I am betting she is going to dig those shoes!