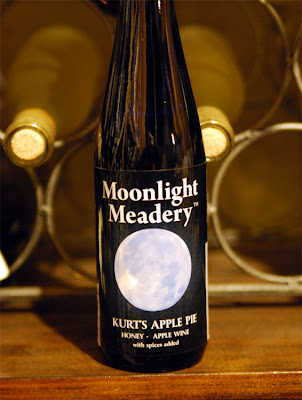 Waxing poetic about drink is not new, and I certainly don’t raise the specter of the art form in any tangible way. But just like those who came before me, when I find some juice I love, I gotta sing it loud and proud.

I’m talking about Moonlight Meadery again. Huh, them again? What gives? Are you a commercial producer wondering how you might get this much love? It’s not magic and just because I don’t sing a particular product’s praises doesn’t mean I don’t have love for it and its creator. But, if there is one what is the formula? Start by making a killer product, then be really nice, warm and welcoming to visitors and finally be an example of how important hard work is. I'll find you eventually. Trust me.

Kurt’s Apple Pie is a seasonal product from Moonlight because it is made with apple cider. Getting the cider locally means a short window each autumn when it is fresh pressed and available just a short ride from the production floor. The cider this year came from Sunnycrest Farms on High Range Road in Londonderry, NH.

The recipe for this mead comes by way of a guy named Kurt, a lifelong friend of Michael Fairborther’s (proprietor of Moonlight). Michael asked if he could have the recipe to use in his commercial venture and the rest is history. Having a hugely successful mead named in your honor by a friend is pretty freaking cool!

Vanilla is the predominant aroma, but I also found other spice, honey and wisps of apple too. The flavor is like apple crisp, with enough of a savory element akin to nuts or oats (maybe the vanilla) that is goes beyond just apples. The spices, cinnamon is included as well, are restrained and well balanced against the apples and honey. The finish is sweet with the essence of honey, somewhat like the character of an ice wine.

The flavors presented here are a confluence of tastes that exude this place and the season. I am a lifelong New Englander and apples, baking spices and this time of year are joined at the hip. This mead puts an adult spin on the mix that I am so happy to be able to enjoy. Even though it is sweet, there is an elegance to that sweetness in the form of some acidity of course, that pulls it back from anywhere near syrup. That really makes it work for me.

This product is likely to be a back to back sellout, and when it is gone, it’s gone! I’ve got a small supply to ration so I can get my apple fix until my newest ciders (including one with honey and cinnamon) are ready sometime next year.