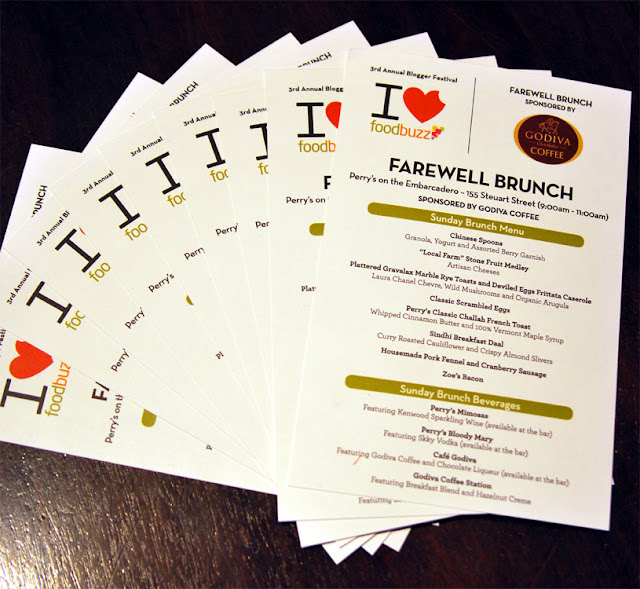 All good things always come to an end and thus the Third Annual Foodbuzz Festival came to a close with one final spread at Perry’s onthe Embarcadaro. Godiva was the sponsor and they were pouring their own coffee and had gifts bags (or two!) for everyone. 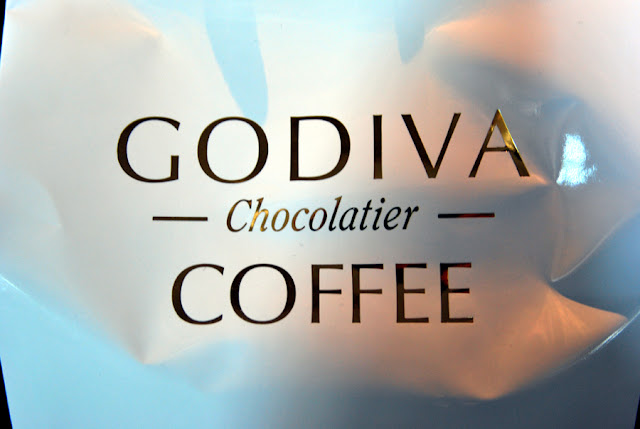 My mission of meeting new people had been accomplished and I cemented that at brunch by meeting a few others. We even talked about the fact that making a small number of connections that would convert in a few new faithful blog readers or Twitter friends was a worthy return. 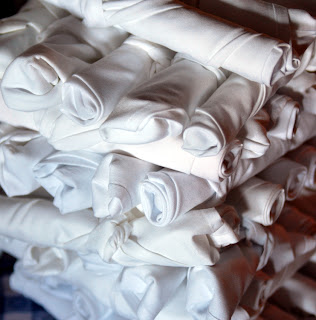 Miriam Wlicox from Sometimes I Veg, and another NH representative of the Foodbuzz Community, found me and we got to chatting about the sessions the day before. She had run a half marathon with a friend that morning and missed the sessions so I was filling her in on what she missed.

We also talked about the fumble with the vegetarian/vegan food options for the formal meals over the prior two days. During that conversation Miriam floated the idea, which I elaborated upon in my second Foodbuzz Festival Day 2 post today, that it might have made more sense for Foodbuzz to have tried to have the meal for everyone be vegan, the lowest common denominator if you will. If you read my post you will note that I thought that would be a great idea despite being an unabashed omnivore.

I also met Aubrey King (I Talk to Food) & Ilana Freddye Pulda (Whisked. Eat Your Heart Out) at the breakfast table. They were both strategizing on which restaurants to try before leaving town Millennium and Tartine were both in play. Part way into chatting Morgan and Tiffany of Strudel & Streusel took the empty seats the the table. Lots of sharing. Travel spots, cooking school (Aubrey & Ilana met there), the cheese fest underway, the coffee, which was brewed strong the way I like it, and laughs from the weekend. It's what I came for.

Breakfast was a cheese-a-palooza, and that was fine by me! Some handmade sausage patties, crispy thick cut bacon, French toast, a berries & granola bite, a deviled egg and coffee I was done and I didn’t eat again for 8 hours! 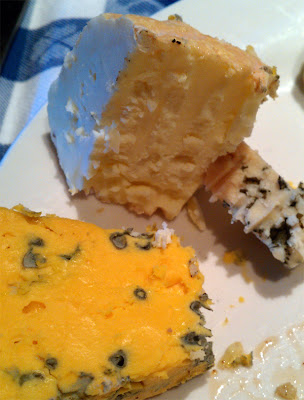 Miriam and I departed Perry’s and headed towards public transit. She was heading back to meet her friends where she was staying and I wasn't sure yet what my next move was gonna be. I can’t wait to invite Miriam to come check out what we do for wine tastings. Since we cook many dishes that vegetarians and more so flexitarians can eat, I think she would have fun both bringing something and sampling what everyone else was doing. I realized afterwards that Miriam and I never got a picture together. The little things I guess! She lives a couple towns over so seeing her somewhere out this way is pretty likely.

I decided on the Ferry Building next. I was pretty sure I was going to have to go before I left and I figured that if I was full I wouldn’t buy any food that I didn’t have time to eat or couldn’t take home. There are so many reasons to come back to this city in that build both those you can enjoy on site and those to go. A wine bar, coffee bar, shops with every type of produce, meat, cheese, bread and dessert, you could really go nuts in there for a couple of meals!

Take a stroll with these photos.

A South Park reference for Margot! 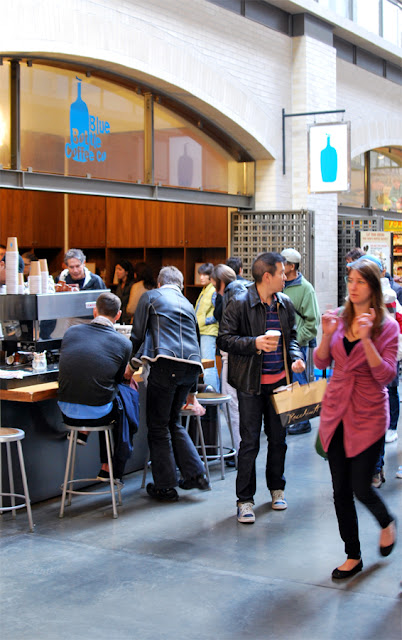 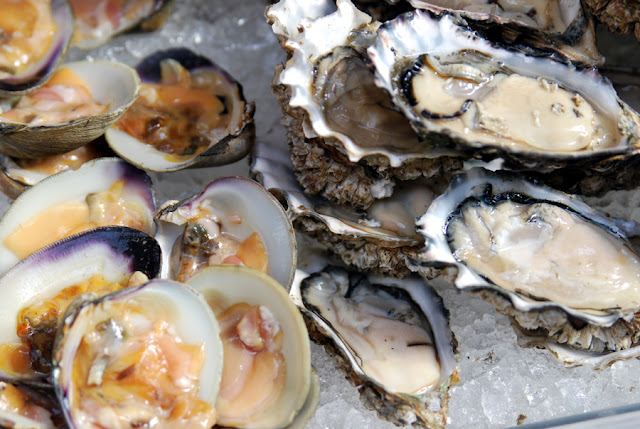 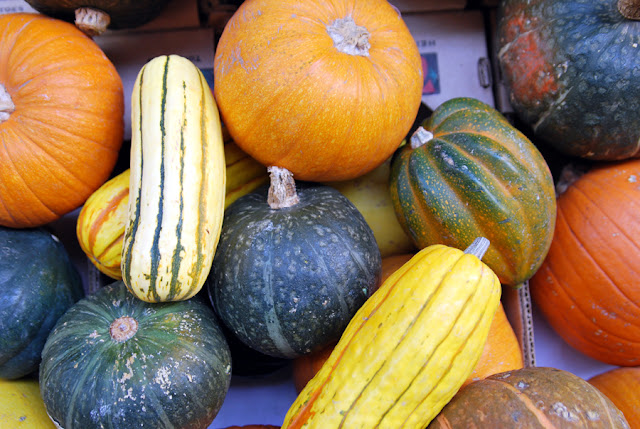 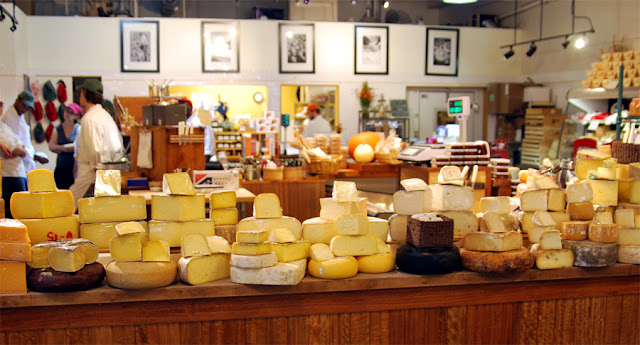 I had some of all of those sips and eats over the weekend, and more. And I loved it!

The Ferry Building is a must do when I come back, especially with a hotel suite where some snack prep is possible. I next headed back to the hotel, dropped my swag off at UPS and out towards The Rogue Brewpub and Fisherman’s Wharf. 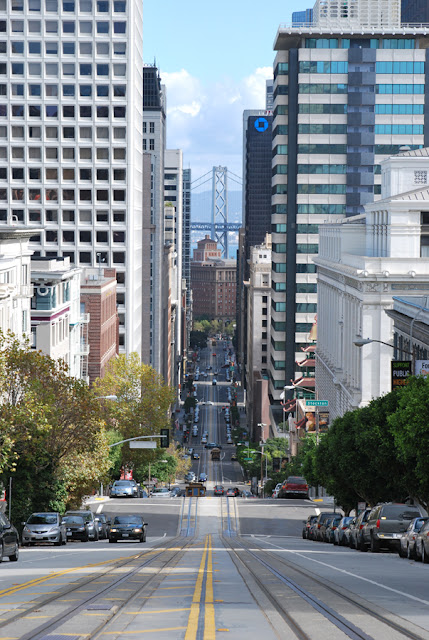 The Rogue review will come out tomorrow, but for now I am going to retrace some steps from nearly 25 years ago.

Back in 1987 when I travelled to the West Coast with my family we stayed in San Fran for a few days. I remember coming out to Pier 39 and the wharf to see the Golden Gate Bridge, Alcatraz, the sea lions and the shops. I found them all right where I left them. It was a lot of fun. I called my parents on the bus ride as I was leaving to remind them of the trip. Here were my 2011 sights. 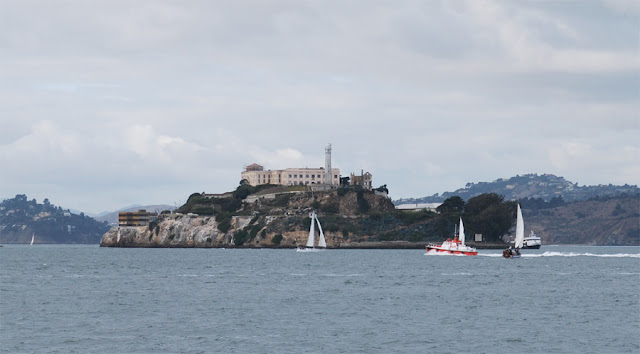 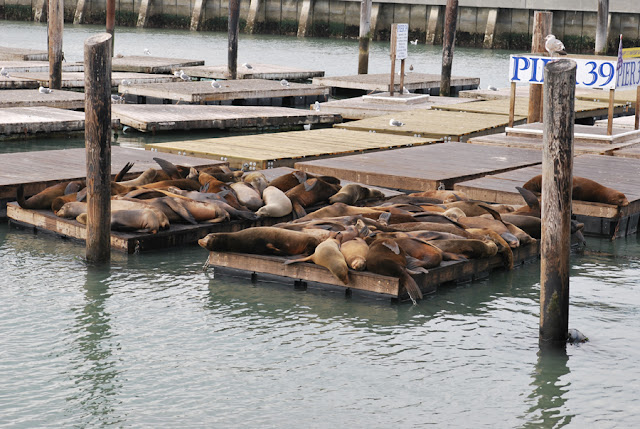 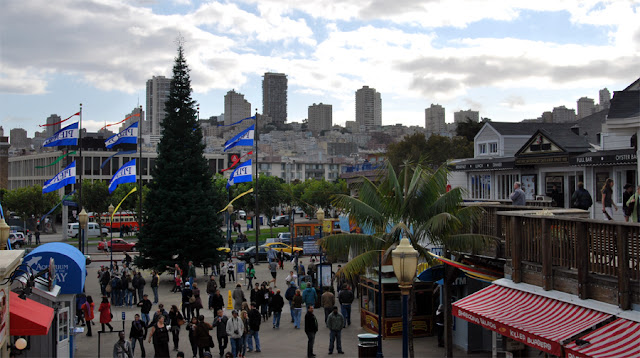 San Francisco is a beautiful city with everything that is said about cities all blended into one. While it has its own charms it is like so many other cities, including Boston where I work. Margot asked me if she would like San Francisco and of course I think she would. A couple of days to do the tourist thing for us would be the right fit for a long trip with wine country and the National Parks also included. Something to dream of!

I was so sorry I couldn't stay for the brunch, but last years delayed flight got me home at midnight and I just couldn't risk it again...
thanks for the recap of the events and some sights of San Francisco!